A recent report by the U.S. Centers for Disease Control and Prevention acknowledged that a large percentage of people who contract the novel coronavirus experience a prolonged symptom duration.

WASHINGTON - More than 150,000 people in the U.S. have died after contracting the novel coronavirus, according to the most recent data from Johns Hopkins University.

As of July 29, there were nearly 4.4 million confirmed cases in the United States, accounting for more than a quarter of all confirmed cases worldwide, according to Johns Hopkins.

The grim milestone comes at a time when many states are experiencing a resurgence of cases, particularly across the South and West. Florida set a new single-day record for coronavirus deaths at 6,333 on July 29 — an increase of 216 from the day prior. 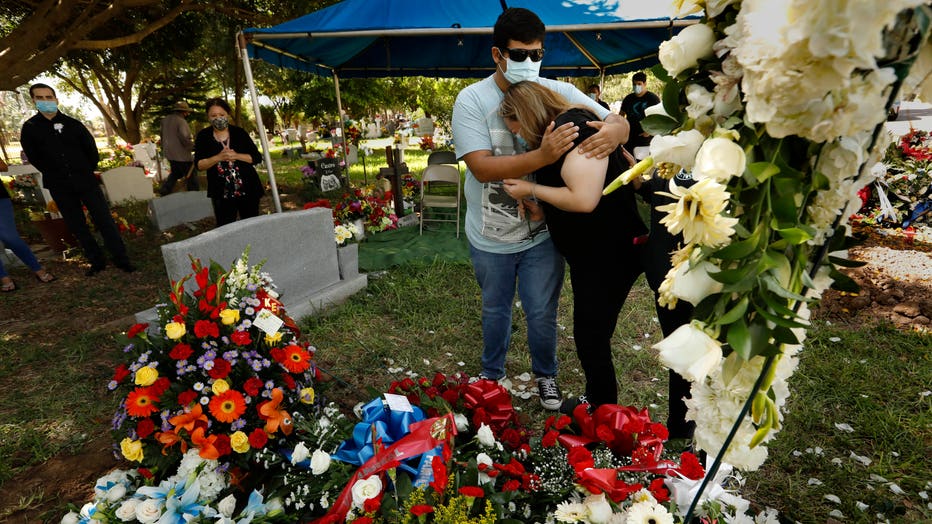 Justin Sequera, 22, hugs his mother Jacqueline Aguirre, who cries a the gravesite of her father, Fernando Aquirre, who died of COVID-19 at the age of 69, on July 20, 2020 in McAllen, Texas. (Carolyn Cole/Los Angeles Times via Getty Images)

Congress is also in the midst of negotiating a new coronavirus relief package as aid and eviction protections expires for millions of Americans. House Democrats proposed $3 trillion in relief in May, while Senate Republicans have a $1 trillion counteroffer that was unveiled this week.

Key to the debate is the $600 weekly unemployment benefit bump that is ending for millions of jobless Americans.

Republicans want to slash it to $200 a week as an incentive to push people back to work. Democrats have shown flickers of willingness to curb the federal aid, but are refusing to go that low.

Meanwhile, U.S. officials said Russian intelligence services are using a trio of English-language websites to spread disinformation about the coronavirus pandemic. Between late May and early July, the websites published about 150 articles about the pandemic response, including coverage aimed either at propping up Russia or denigrating the U.S., according to the Associated Press.