ORLANDO, Fla. - Warnings have been issued for parts of Florida as Tropical Storm Zeta prepares to restrengthen into a hurricane and pound the Gulf Coast.

Western Panhandle residents deluged by Hurricane Sally last month are being advised to expect heavy rain and wind up to 70 mph when Tropical Storm Zeta reaches the Gulf Coast on Wednesday. It currently has maximum sustained winds of 65 mph.

The state Division of Emergency Management tweeted an advisory for people from Panama City to Pensacola to monitor weather alerts and local news.

“Tropical storm warnings from #Zeta are in effect for Florida's Western Panhandle,” the division tweeted midday Tuesday. “This means winds of 40-70 mph are expected Wednesday night. Now is the time to prepare.”

The western Panhandle was under a tropical storm warning, with the center of Zeta located Tuesday just north of Mexico’s Yucatan Peninsula, moving northwest at 14 mph. The storm is expected to make landfall Wednesday night along the Gulf Coast but is not expected to make a direct hit in Florida.

“We are talking about, in portions of the western Panhandle, seeing winds of 60 to 70 mph,” said Godsey, who is stationed at Florida State University in Tallahassee. “That is going to bring down a lot of trees, cause some power outages and things of that nature.”

The system continues to produce strong winds and heavy rainfall across the northern portions of the Yucatan Peninsula. Storm surge and hurricane warnings have been issued for the northern Gulf Coast. 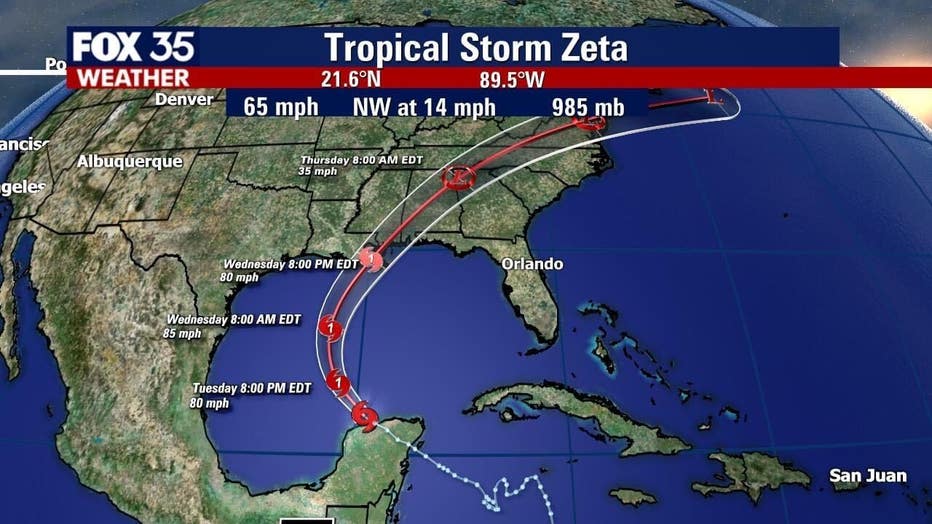 "This is a life-threatening situation," the NHC said. "Persons located within these areas should take all necessary actions to protect life and property from rising water and the potential for other dangerous conditions. Promptly follow evacuation and other instructions from local officials."