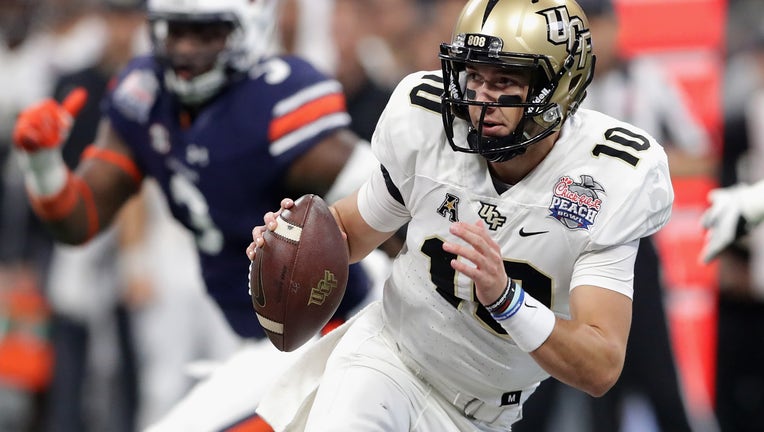 ATLANTA, GA - JANUARY 01: McKenzie Milton #10 of the UCF Knights looks to pass in the first half against the Auburn Tigers during the Chick-fil-A Peach Bowl at Mercedes-Benz Stadium on January 1, 2018 in Atlanta, Georgia. (Photo by Streeter Lecka/Get

The team's coach, Mike Norvell, announced it on Twitter on Sunday afternoon, stating that "it's a great day to be a Florida State Seminole. #NoleFamily with a big time addition from the #808t0850 #Aloha #KeepCLIMBing"

Milton posted about the announcement too, tweeting "committed" with a photo of himself in an FSU uniform.

Redshirt sophomore Jordan Travis is the returning starter for FSU and freshmen Chubba Purdy and Tate Rodemaker will also compete for time.

Earlier this month, UCF Athletics announced that Milton was leaving the team, citing that "he has no interest in competing for the UCF quarterback role against his best friend, Dillon Gabriel."

UCF Head Coach Josh Heupel described Milton as "the most influential person in the history of our program.” He threw for 8,683 yards and 72 scores in three years with the Knights, and led them to a 13-0 record in 2017.

Milton joined the UCF football team in 2016. He became the starting quarterback three games into his freshman season. He went on to become a star for the team until he suffered a gruesome right knee injury, forcing him to undergo two years of rehabilitation.