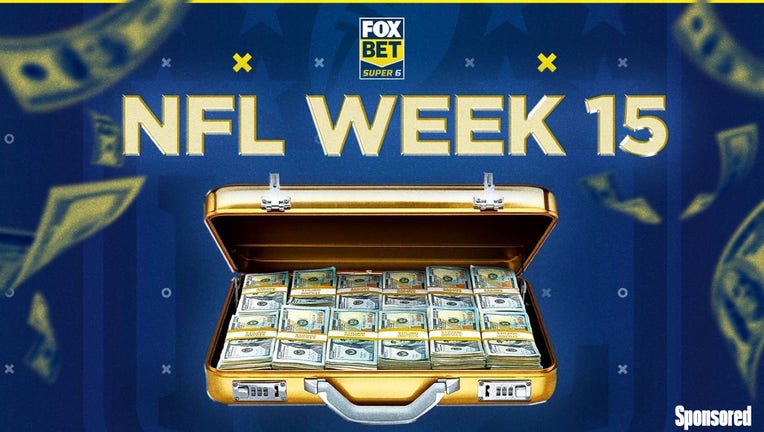 The NFL playoff picture is starting to take shape.

Take the Cowboys, a team destined to at least make an appearance this postseason. The last time America's Team went to the playoffs in back-to-back seasons was in 2006 and 2007. Remember when Tom Petty rocked it out on the Super Bowl stage in Arizona? Yeah, that's how long it has been since the Cowboys have made the postseason in consecutive years. But a win in Week 15 could have them partying like it's ‘06-’07.

Then there are squads like the Patriots — America's Other Team — who are still fighting for their playoff lives. New England's in the hunt, but can the Pats keep winning and eventually claim a playoff berth?

These are just a few intriguing storylines we're watching in Week 15. But why only watch when you can play and, better yet, win money?

That's where FOX Bet Super 6 has you covered.

FOX Bet Super 6 is a free-to-play contest where you pick the winners of all six marquee games with their margins of victory for a chance to win $100,000 in our NFL Sunday Challenge. Just download the FOX Bet Super 6 app on your phone or mobile device, make your picks and submit your selections before Sunday’s games kick off.

It really is free to play, it's so much fun, and it's easy. And people really do win this money!

If you want a chance to fatten your wallet to the tune of an extra $100K, get in on the FOX Bet Super 6 action.

And if you need some help, we got you covered there, too. Check out our predictions for this weekend's marquee matchups!

Both these squads are fun to watch, but only one has a real shot at winning. And that team, my friends, is Philadelphia.

The Eagles are an offensive juggernaut. Quarterback Jalen Hurts has passed for 3,157 yards and 22 touchdowns this season. His 108.4 quarterback passing rating is the best in the league. And Pro Bowl wide receiver A.J. Brown has been on fire, too. He's only the third player in Philly franchise history to rack up 10 TDs in the first season with the team. On a side note, Hurts is now the favorite to win NFL MVP.

On the other side are the Bears, a squad that ranks 29th in scoring defense. Good luck, Chicago, trying to stop Hurts, Brown & Co.

Bears quarterback Justin Fields has scored a rushing TD in six straight games, so witnessing the evolution of Fields has been fascinating. But Chicago has no chance in this one.

At FOX Bet, Carolina is favored by 2.5 points. Under normal circumstances, meaning a year when the Steelers aren't a dumpster fire, this spread might be laughable. But alas, here we are.

If Pittsburgh drops this game, this will be the team's first losing season under head coach Mike Tomlin. And if that wasn't bad enough news, QB Kenny Pickett might not be available to start Sunday after entering concussion protocol in the squad's Week 14 loss to the Ravens.

So when we say we like the Panthers in this one, it's not because we really like the Panthers. They're a dismal 5-8 straight up (SU), just like Pittsburgh. But look for Carolina — the team that's 7-6 against the spread this season and 4-3 SU at home — to get the straight-up win and the cover.

Panthers by 4 to 5 points

It took late-game heroics by Dak Prescott and Ezekiel Elliott to get past the one-win Texans in Week 14. But the Cowboys still escaped with a victory. The Jaguars handled business, too, by upsetting the Titans.

But there won't be an upset in this matchup. The Cowboys are 4.5-point favorites over the Jags at FOX Bet, and after the scare they got last week, Dallas will come out on top of this one decisively.

The Boys are one of the best teams ATS this season, with an 8-5 record in that category. They also have one of the best defenses, leading the NFL with 77 tackles for loss. Offensively, they are loaded with talent. Wideout CeeDee Lamb is one of the league's top 10 receivers. With a Week 15 win, Big D will secure a playoff berth, which is the key to this game.

Jacksonville will try to play spoiler in consecutive weeks and keep it close for a few quarters, but the Cowboys will break away late as the playoffs are in sight.

From the looks of it, not the Falcons.

When the two squads met in Week 1 this season, New Orleans got the narrow 27-26 victory. And dating back to 2019, New Orleans has beaten Atlanta five out of six times.

Yeah, the 4-9 Saints are struggling, but the Falcons are dealing with a special kind of turmoil. Quarterback Marcus Mariota was benched for rookie Desmond Ridder. That move reportedly prompted Mariota to walk away from the team.

If Atlanta loses, this will mark the team's fifth-consecutive losing season. If New Orleans falls short, this will be the first time NO has had 10 losses in a season since 2005.

The only edge we see is for the Saints, and that's because of how they usually fare after a bye. They are 5-1 SU in their last six contests following a bye. Last week's rest week will work in their favor.

Heading into Week 15, the 7-6 Pats are currently the seventh seed in the AFC and in the Wild Card hunt. They trounced quarterback-less Arizona in Monday Night Football and come into this game as 1.5 point-favorites to topple Las Vegas.

New England ranks fifth in the NFL in scoring defense, and the Pats' Matt Judon has a career-high 14.5 sacks this season. So while Mac Jones' 2,198 passing yards are paltry compared to the league's best QBs, the Pats can make up for Mac's mediocrity in other areas.

The Raiders rank 31st in the NFL in takeaways. They're coming off a disastrous 17-16 loss to the Rams, where they squandered a 10-point halftime lead.

Las Vegas will be desperate to get back on track, but the Patriots are riding MNF momentum.

The Cardinals just cannot catch a break. Quarterback Kyler Murray tore his ACL on the first drive of the game on a non-contact play. Where do they go from here?

Two upsides to consider for Denver: Broncos rank fourth in scoring defense, and Jerry Jeudy was on fire in Week 14 with his career-high three receiving TDs.

Hear us out when we say this is not a vote of confidence for Denver. The Broncos have lost five straight. But the Cardinals are 1-5 in their last six matchups, and they're trotting out Colt McCoy as the starting QB at Mile High.

Don't call it a bounce back, but the Broncos will win.

Broncos by 4 to 5 points

Now, are you ready to win some money?

After you download the app and submit your selections for the upcoming contest, be sure to share your picks with us by tagging @FOXSuper6 and @EricaReneeD and using the #EricaSuper6 hashtag across all social media platforms.

Download the FOX Bet Super 6 app for your chance to win thousands of dollars on the biggest sporting events each and every week! Just make your picks and you could win the grand prize. Download and play today!

No purchase necessary. Open to legal residents of the US, excluding WA. 18 and older. See terms and conditions at foxsuper6.com. Sweepstakes and Prize Sponsored by TSG Interactive US Services Limited.