Marco has weakened down to a tropical depression while Tropical Storm Laura continues to trek west and is expected to strengthen.

ORLANDO, Fla. - The FOX 35 Weather team is tracking Marco and Laura as they set their eyes on the Louisiana coast.

The National Hurricane Center (NHC) says that both Laura and Marco are expected to impact the Louisana-Texas coast, including the land between Houston, Texas, and coastal Louisana in its cone.

Laura is strengthening and is expected to become a Category 2 hurricane -- winds of at least 96 mph -- upon landfall.

Marco is much weaker and was downgraded back into a tropical depression late Monday after becoming a hurricane on Sunday.

There is a chance the storms could merge over the Gulf, with the stronger of the two absorbing the weaker storm. However, meteorologists say this would not create an even stronger storm. If that happens, it would be the first time two hurricanes were in the Gulf at the same time, forecasters say, going back to the start of record-keeping in 1851.

The good news is that Florida is out of both Laura and Marco's cones. The Sunshine State does remain on the east side of these storms though, creating the chance for gusty winds, an increase in rain chance, and the potential for tornadic activity.

RELATED: Fujiwhara effect: Here's what could happen if Laura and Marco collide in the Gulf of Mexico

The NHC said that Tropical Storm Laura is currently located about 65 miles east-southeast of Cuba. It is moving west-northwest at 20 mph, moving over the Caribbean Sea and soon Cuba on Monday. On Tuesday and Wednesday, it will move over the Gulf of Mexico. 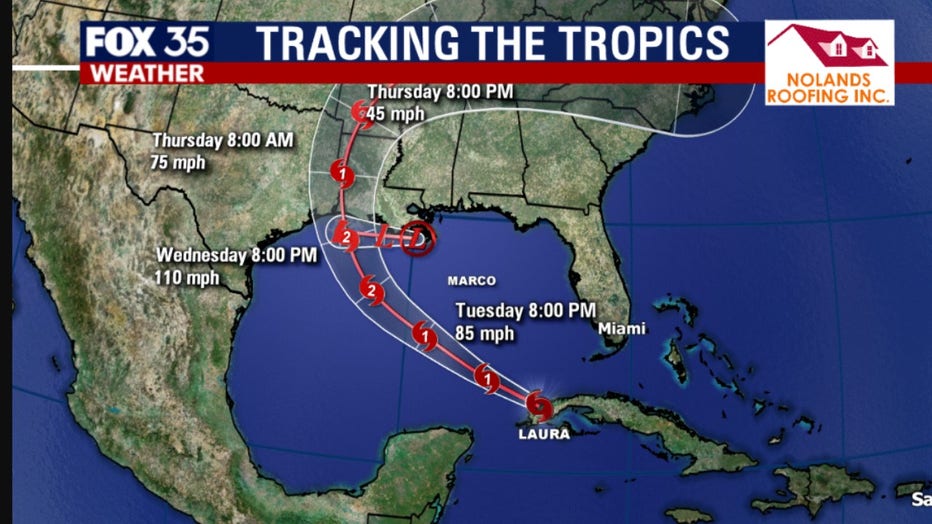 They said Laura currently has maximum sustained winds of 60 mph with higher gusts. It is expected to become a hurricane by early Tuesday. It could be a Category 2 upon landfall along the Louisana-Texas coast.

Tropical Storm Warning is in effect for:

The NHC said that Tropical Storm Marco is about 55 miles southeast of Mississippi and is moving north-northwest at 8 mph. It is expected to approach the coast on Monday afternoon before turning west and heading very close to the Louisana coast on Tuesday.

They said Marco currently has maximum sustained winds of 50 mph. It became a hurricane on Sunday but within hours, downgraded back into a tropical storm. Further weakening is expected, as it is forecasted to become a tropical depression on Monday night. It will then degenerate even further to a remnant low on Tuesday. 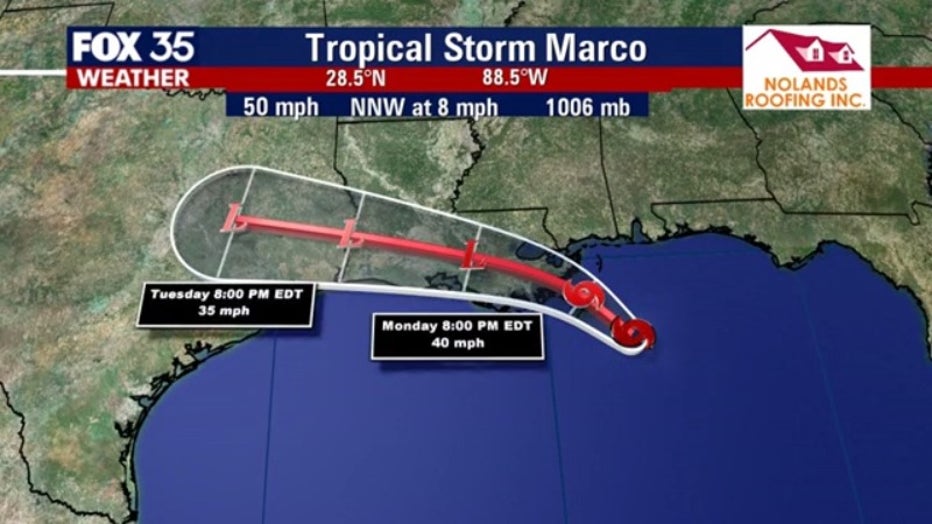 Tropical Storm Warning is in effect for:

Storm Surge Warning is in effect for: 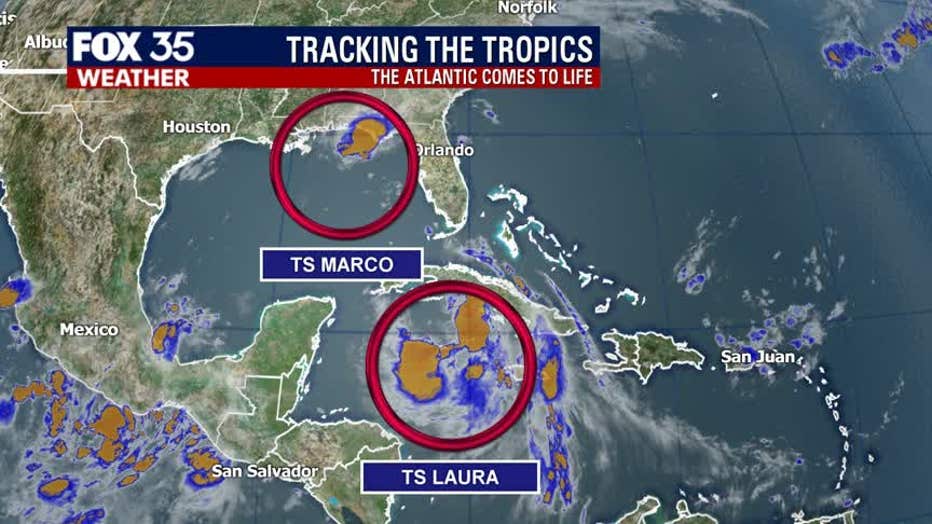 For example, National Oceanic and Atmospheric Administration (NOAA) predicted an above-average season, with 13 to 19 named storms. Six to 10 of those would become hurricanes and three to six of those are forecasted to become major hurricanes (Category 3 or higher).

Fujiwhara effect: Here’s what could happen if Laura and Marco collide in the Gulf of Mexico

Two tropical systems will be in the Gulf of Mexico at the same time early next week. What happens if they merge? FOX 35 meteorologist Allison Gargo explains the Fujiwhara effect.