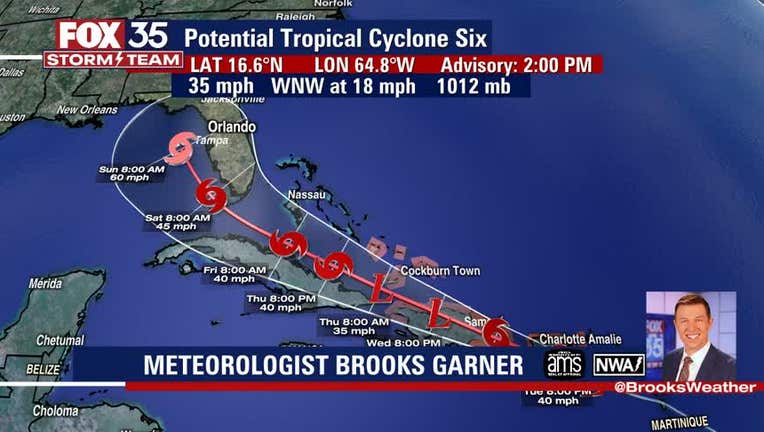 Confidence has grown that Central Florida will receive direct impacts from an approaching system that is expected to be named Fred.

Impacts expected include a likelihood of squally, heavy rain in quick-moving downpours, and also the possibility of isolated, fast-tracking tornadoes.

If organized tropical rain bands set up, we could see flooding in some areas where those downpours develop.

All indications at this time suggest the system will remain a minimal tropical storm as it passes by our region, but as the tropics are fickle by nature and this could quickly change, stay with the FOX 35 Storm Team all week long as we track this sixth tropical system of the 2021 hurricane season.

We could see our 6th named storm of the 2021 Atlantic hurricane season as early as Tuesday. The FOX 35 Storm Team is tracking the system every step of the way.

The National Hurricane Center says Potential Tropical Cyclone Six is likely to become Tropical Storm Fred on Tuesday. The system is moving toward the west-northwest near 18 mph.

On the forecast track, the disturbance is expected to pass near or over the U.S. Virgin Islands and Puerto Rico later Tuesday, be near or over Hispaniola on Wednesday, and then close to the southeastern Bahamas and the Turks and Caicos Islands on Thursday, the NHC said. Florida remains in the cone of uncertainty for now.

FOX 35 Storm Team Meteorologist Brooks Garner explained that "the latest tracks suggest the center may pass just west of Tampa Bay, which would reduce our impacts further, holding the heaviest rain west of the Orlando region."

He added though, "of course, whenever a tropical system is in the vicinity, squally, spotty torrential rains can quickly move in and move out, but there's also going to be a tornado risk, especially if the system track far enough west to allow sunshine through the clouds to heat up the area."