According to the National Hurricane Center, development is unlikely during the next day or so due to unfavorable upper-level winds.

"Environmental conditions are expected to be only marginally conducive for development during the next day or so as the low moves northeastward before it is absorbed by an approaching frontal system over the north-central Atlantic."

Chances of development are at 30% over the next 2 days.

Another non-tropical area of low pressure is expected to form over the far eastern Atlantic during the weekend. 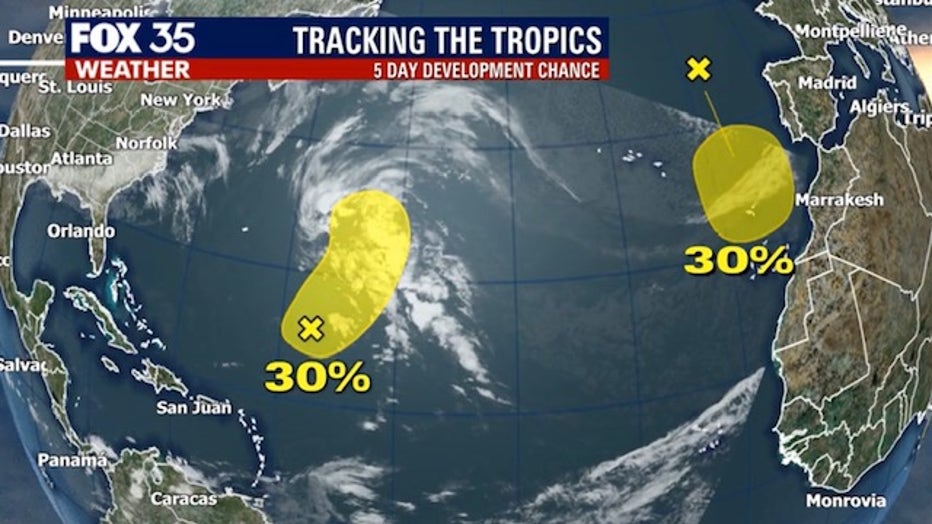 The NHC says the system could gradually gain subtropical characteristics early next week while it moves slowly southward to the west and southwest of Portugal. So far, development chances over the next 5 days remain low at 30%.

This hurricane season has been one for the record books with 30 named storms forming this season.

Meanwhile, the first big cold front of the season for Central Florida is just days away.

MORE NEWS: Forecast: Central Florida to drop into the 30s, 40s next week

Look for a dramatic fall in local temperatures for both day and night for much of next week. By Monday and Tuesday, we could see some of the coldest air in our area since last January and February when parts of Central Florida drop into the 30s and 40s.