Brevard County Sheriff’s Office K-9 "Daisy Mae" recently became a mom as she delivered 10 beautiful new bloodhounds who will be trained to work for the agency!

BREVARD COUNTY, Fla. - It looks like Christmas came early for the adorable K-9 bloodhound puppies that recently joined the Brevard County Sheriff's Office. The agency put out a call to the public to help name its litter of furry crimefighters – and the winning names have been chosen.

The sheriff's office received over 5,000 name suggestions in its "Name That Puppy" contest. They were needing names for 7 of the 10 puppies. Two of them were already named by the agency: Baby Blue after the puppies' dad and Cindy after a woman who donated K-9 ballistic vests to keep them safe while on duty.

The 10th puppy will be named as part of a new exhibit at the Brevard Zoo.

Suggestions came in from all over the world on what to call these adorable bloodhounds.

"The names came in all different forms and ideas from naming them after movie stars, military generals, iconic figures, and even personal heroes and family members," Sheriff Wayne Ivey said. 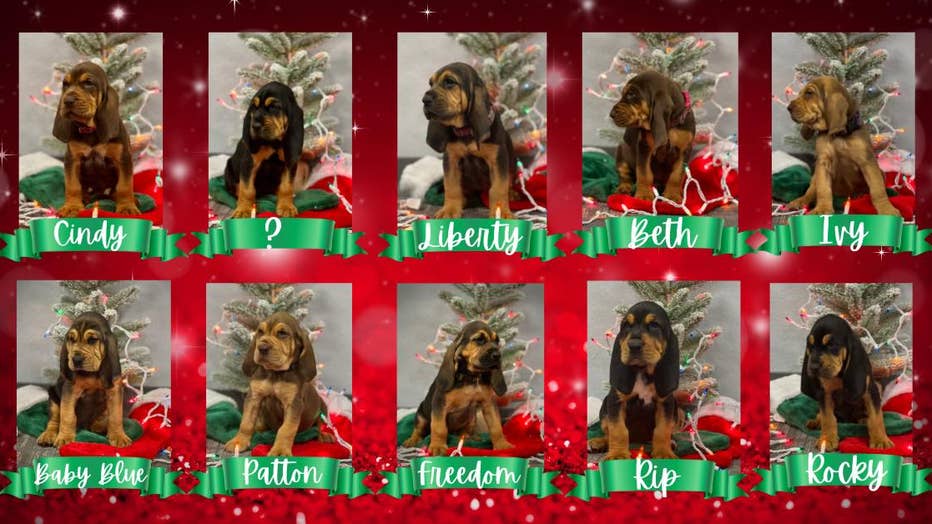 After sifting through the submissions, the sheriff's office is pleased to introduce the public to:

"Thank you to everyone who suggested a name for our new K-9 Heroes and also for all of your amazing support for our agency!" the sheriff said. "And now it’s time for the puppies to start their training as they will one day be called upon to help find missing children and seniors with Alzheimer’s or Dementia!"