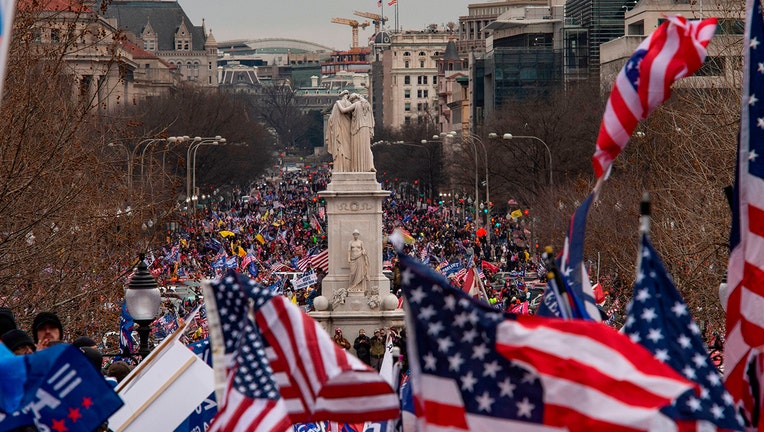 Trump supporters clash with police and security forces as they storm the US Capitol in Washington D.C on January 6, 2021

TALLAHASSEE, Fla. - As supporters of President Donald Trump stormed the U.S. Capitol in an effort to block congressional certification of the 2020 election on Wednesday, Republican leaders in Florida released legislation aimed at cracking down on violent protests.

Gov. Ron DeSantis, a close ally of Trump, rolled out his proposed law-and-order plan in September, weeks ahead of the presidential election last fall, as the country was roiled by protests sparked by disparate treatment of Black people by police.

But with the U.S. Capitol under siege by Trump backers Wednesday night, Florida GOP House and Senate leaders rolled out a revamped version of the anti-riot proposal that would create a host of new crimes, crack down on protests and make it difficult for local government officials to trim spending on law enforcement.

Speaking to reporters on Thursday, DeSantis --- who has yet to acknowledge President-elect Joe Biden as the winner of the Nov. 3 election --- boasted that he was the first governor in the nation to propose such a measure.

MORE NEWS: Central Florida man among those arrested during riots at U.S. Capitol

The Republican governor condemned the rioting that took place in the nation’s capital Wednesday as members of Congress were beginning the process of certifying the electoral-college votes showing Biden’s clear victory over the incumbent president.

"It doesn’t matter what banner you are flying under. The violence is wrong. The rioting and the disorder is wrong. We are not going to tolerate it in Florida," DeSantis said Thursday, adding that he hopes the proposal will get "even more support" following Wednesday’s uprising.

DeSantis said the effort is "something that needs to be done."

The legislation (SB 484, HB 1) would create a new offense of "mob intimidation" when three or more individuals act "with a common intent, to compel or induce, or attempt to compel or induce, another person by force, or threat of force, to do any act or to assume or abandon a particular viewpoint."

The identical bills would also enhance penalties for defacing public monuments, make it a crime to destroy a memorial and require mandatory restitution for the full cost of repair or replacement of damaged or destroyed memorials.

And the measure would make a crime of "doxing," the posting of private information about an individual on social media sites, when such data is published with the intent to "threaten, intimidate, harass, incite violence … or place a person in reasonable fear of death or great bodily harm."

The plan would also do away with bail or bond for people involved in violent protests.

The proposal would also allow citizens to challenge reductions in local law-enforcement budgets and give the governor and Cabinet the authority to overturn reductions in spending.

The House and Senate proposal, however, does not go as far as the plan floated by DeSantis last year.

DeSantis’ proposed legislation would have expanded the state’s "stand your ground" law, which allows people to use deadly force when they feel threatened. Such a provision is not included in the measure released Wednesday.

DeSantis had also sought to add violent protests to crimes involving racketeering, an issue also not included in the latest version of the measure.

The proposal will give law enforcement and prosecutors "the tools and support they need to keep Floridians safe, communities whole and property undamaged," Sprowls, a former prosecutor, said in the statement.

"I fully respect the right of every American to peacefully protest; however, there is absolutely no excuse for attacking law enforcement and destroying property," Simpson said.

But Democrats in Florida who harshly criticized DeSantis’ proposal last year continued to rail at the revamped legislation, which the governor initially released after months of protests throughout the country that led to a national reckoning about racial inequities in policing and other areas of society.

State Sen. Shevrin Jones, D-West Park, said the governor’s plan was geared toward protests that arose following the police-involved deaths of George Floyd in Minneapolis and Breonna Taylor in Atlanta.

"And now it seems that the gears changed with what happened yesterday at the Capitol," Jones, who is Black, told The News Service of Florida in a phone interview Thursday.

Jones said he was happy that the stand your ground expansion was not included in the measure, which GOP leaders hope will be passed when the 2021 legislative session begins in March.

"But did it really take a group of domestic terrorists to storm the U.S. Capitol who are not Black and brown for them to recognize that was wrong?" he said.

Jones also noted that the violent protests that erupted throughout the country last summer did not occur in Florida.

"So we’re creating an issue that’s not even real," he said.

Pointing out that millions of Floridians remain unemployed due to the pandemic, Jones said lawmakers should be focused on the state’s response to COVID-19.

"I think our priorities are all jacked up, when we should be focused on vaccinating people. ... Not on things like this that have no return on our investment within the state," he said.