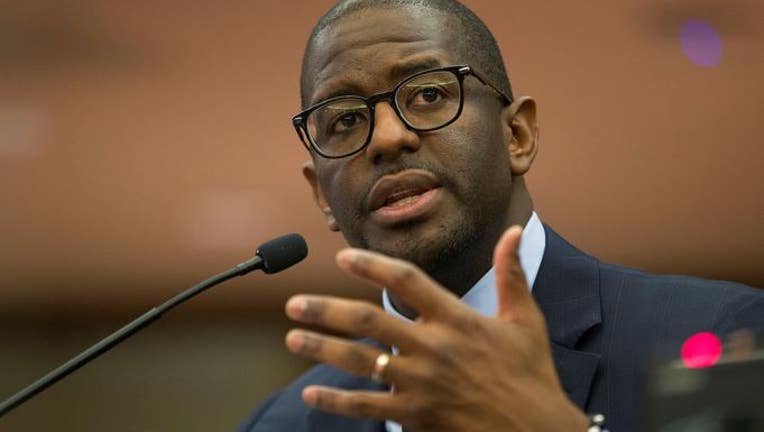 FORT LAUDERDALE, FLORIDA - MAY 06: Andrew Gillum, Forward Florida Chair, speaks during The Elections Subcommittee field hearing on 'Voting Rights and Election Administration in Florida' at the Broward County Governmental Center on May 06, 2019 in For

TALLAHASSEE - A federal judge has refused to dismiss charges of lying to the FBI and wire fraud against former Democratic gubernatorial candidate Andrew Gillum, while also short-circuiting a Gillum contention that he is a victim of selective prosecution.

U.S. District Judge Allen Winsor on Thursday issued a 21-page ruling that rejected arguments made by attorneys for Gillum, who was indicted in June along with a longtime adviser, Sharon Lettman-Hicks.

The indictment alleged that Gillum, a former Tallahassee mayor, made a false statement to the FBI, took part in a conspiracy to commit wire fraud and committed wire fraud. Gillum, who narrowly lost the 2018 gubernatorial race to Republican Ron DeSantis, pleaded not guilty, and a trial is scheduled in April.

The charges came after a lengthy federal investigation into corruption in city government and included allegations that political contributions were diverted to Gillum’s personal use.

Gillum’s attorneys last month filed three motions seeking dismissal of charges and one motion seeking an evidentiary hearing on a contention that Gillum was singled out for prosecution because he was Black candidate for governor.

But Winsor, who was appointed to the federal bench by former President Donald Trump, wrote Thursday that Gillum did not show evidence of "discriminatory effect."

"(Even) if he had offered evidence of discriminatory effect, he would still have to show discriminatory purpose," Winsor said. "He would have to cite evidence showing that the government’s decision to prosecute him was ‘because of’ a protected characteristic. But he offers no evidence suggesting race- or political-affiliation-based prosecution."

Gillum’s attorneys raised a series of arguments in trying to get charges dismissed, including that prosecutors had violated Gillum’s due-process rights because of lengthy delays before the indictment.

In part, they wrote that prosecutors waited nearly five years to charge Gillum for allegedly making false statements to the FBI related to conversations he had with undercover agents posing as representatives of a development company.

"If Gillum had in fact made false statements during the June 14, 2017, conversation, the FBI would have been aware of the facts supporting that crime on June 14, 2017," Gillum’s attorneys wrote. "Instead of charging Gillum then, the government sat on this charge for nearly five years. The delay was necessarily deliberate and tactical (or reflective of a lack of genuine belief that a false statement was made)."

But Winsor called the motions filed by Gillum’s attorneys "meritless."

On the issue of delays in filing charges, for example, he said Gillum’s attorneys did not argue that a statute of limitations had been violated.

"Faded memory is a possibility inherent in any delay; it does not constitute actual prejudice sufficient to bar prosecution," Winsor wrote. "Second, even had he shown prejudice, Mr. Gillum has made no showing that the government delayed to gain a tactical advantage. He offers no reason to conclude that this was the purpose: he simply says it was."