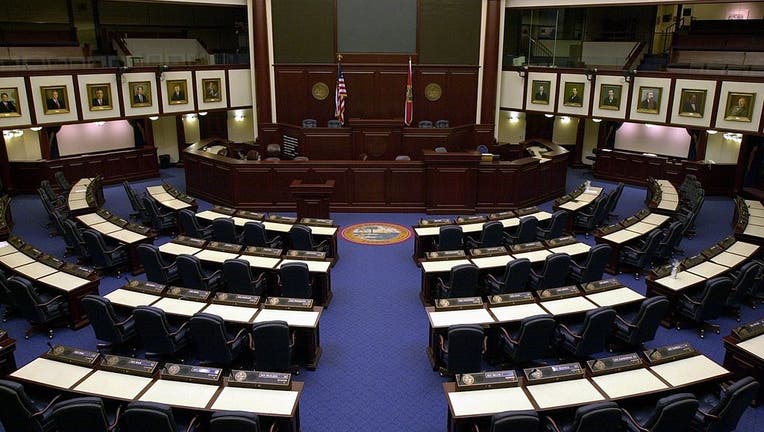 TALLAHASSEE, UNITED STATES: The Florida House of Representatives chamber 06 December, 2000, at the State Capitol in Tallahassee, Florida. The State Legislature will convene a special session 08 December to choose the Florida electors who will vote fo

TALLAHASSEE, Fla. - Legislative leaders on Tuesday showed support for limits on lawsuits stemming from the COVID-19 pandemic, but they could have a difference of opinion about whether to move ahead with changes to the workers’ compensation insurance system.

“I think we all agree it’s a problem that we need to figure out the best way to solve. Making sure that people who were going about it kind of the right way --- trying to do the right thing for their customers and employees --- don’t get blindsided by a frivolous lawsuit, while making sure that if somebody is doing the wrong thing, that they’re still held accountable,” Sprowls, an attorney, said.

Meanwhile, Simpson predicted the Legislature could quickly address a COVID-19 lawsuit limitation proposal when it meets during the 2021 legislative session, which starts in March.

“That is certainly a viable option, and it would happen pretty early in the session, I would guess,” Simpson said when asked about lawsuit limitations.

But Simpson said he wouldn’t support legislation that would prevent people from filing lawsuits against so-called “essential” businesses, an idea advocated by a group calling itself the RESET Taskforce, which is comprised of about 40 lobbyists and association representatives.

The task force recommended that any business that was identified as “essential” in executive orders issued by Gov. Ron DeSantis be given immunity from lawsuits related to COVID-19.

“Any legislation we would pass, I cannot imagine that we are going to let people off the hook for negligence,” Simpson said, adding, “I don’t think you ever in any condition put a blanket statement  that no one would have any liability associated with COVID. But I think if you’ve made the right attempt to follow the CDC (federal Centers for Disease Control and Prevention) guidelines, then that’s something we should take a look at.”

Proposals to limit lawsuits --- an issue commonly known as tort reform --- traditionally have touched off major lobbying battles in the Legislature. Sprowls and Simpson discussed the issues shortly after being sworn into their leadership positions during a one-day organization session Tuesday.

Meanwhile, Sprowls and Simpson may see things differently when it comes to workers’ compensation insurance.

Business groups have pushed the Legislature to address the system since a 2016 Florida Supreme Court ruling that found strict caps on plaintiffs’ attorney fees in workers’ compensation cases were unconstitutional.

After the ruling, businesses warned that the elimination of the caps on attorney fees would cause workers’ compensation rates to increase and pushed lawmakers to reinstate them. The House responded in 2017 and 2018, but such legislation has not received support in the Senate.

MORE NEWS: Interactive map shows your risk of catching COVID-19 at an event

Now, though, the opposite may be true.

Simpson, a businessman who is involved in farming, contracting and asbestos removal, said the Senate could revisit the proposals the House passed in 2017 and 2018. When asked whether that meant reinstating fee caps for plaintiffs’ attorneys, Simpson said “potentially.”

Meanwhile, Sprowls acknowledged that he supported the House bills in 2017 and 2018. Despite the business groups’ arguments, workers’ compensation rates have decreased in 2018, 2019 and 2020 and are expected to decrease again in 2021.

“Now, kind of the prevailing wisdom is maybe don’t fix something that is not broken at the moment when it comes to workers’ comp and to the rates,” Sprowls said. “Certainly, I'm willing to look at it, but I think certainly the rate trends are a good indicator.”