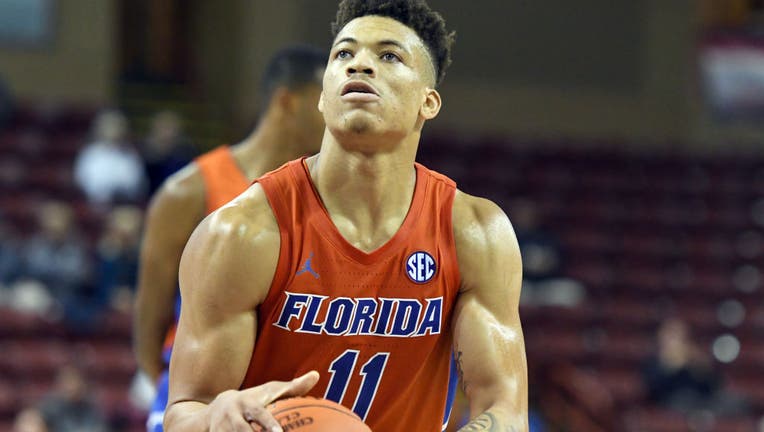 CHARLESTON, SC - NOVEMBER 21: Keyontae Johnson #11 of the Florida Gators takes a foul shot during a first round Charleston Classic basketball game against the Saint Joseph's Hawks at the TD Arena on November 21, 2019 in Charleston, South Carolina. (P

GAINESVILLE, Fla. - The University of Florida’s Keyontae Johnson is being released from the hospital, the basketball team tweeted on Tuesday.

"Today is a great day! Keyontae is being released from the hospital. We continue to be amazed at the pace of his recovery," the tweet read in part.

Johnson was initially in critical but stable after collapsing on the court during a game against Florida State University.

The scary scene took place early in the first half of the game between the in-state rivals. Johnson, the SEC Preseason Player of the Year, appeared to collapse on the court.

The team tweeted that there are still many questions as to what caused him to collapse.

However, like most of his teammates, Johnson tested positive for COVID-19 during the summer. Although the cause of Johnson's ailment was not immediately known, the coronavirus can lead to myocarditis, a viral infection of the heart muscle. At its most severe, myocarditis can lead to sudden cardiac arrest and has been a documented cause of death for young, otherwise healthy athletes.

Johnson had shared an update on Instagram last Friday from the hospital, thanking everyone for their support.

"Hey everybody. First and foremost, I would like to thank God, I know you all have been saying your prayers out," he said.

Johnson is one of the best players on the Florida team. The junior forward was averaging 19.7 points, 6 rebounds and 1.7 assists coming into the game against Florida State. He was shooting about 64% from the field.