FOX 35 meteorologist Jayme King has an update on freeze warnings and watches issued for Florida counties as temperatures plummet.

ORLANDO, Fla. - Arctic air is funneling into Florida and this means that the coldest temperatures of the winter so far will be moving in for a couple of days.

Freeze warnings have been issued for Alachua, Gilchrist, Levy, Marion, and Putnam counties, and points north. Warnings are in effect until 10 a.m. on Tuesday.  Freezing conditions are expected to spread south for Tuesday night into the Metropolitan Orlando area.

Despite full sunshine this afternoon, expect gusty winds and highs struggling to make 60 this afternoon. It will certainly be quite cool all across the FOX 35/FOX 51 viewing areas. Areas near Gainesville and Ocala will struggle to break the mid-50s, even though skies up that way will also feature ample sunshine. 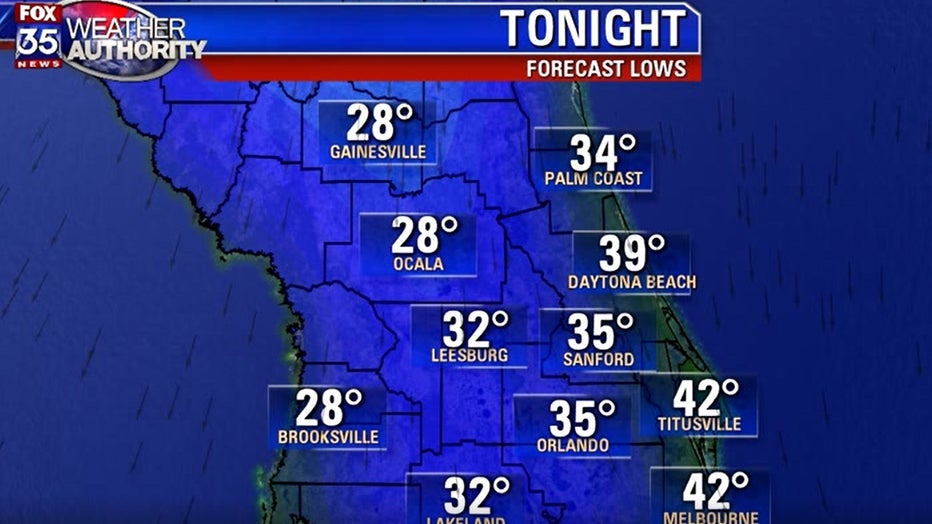 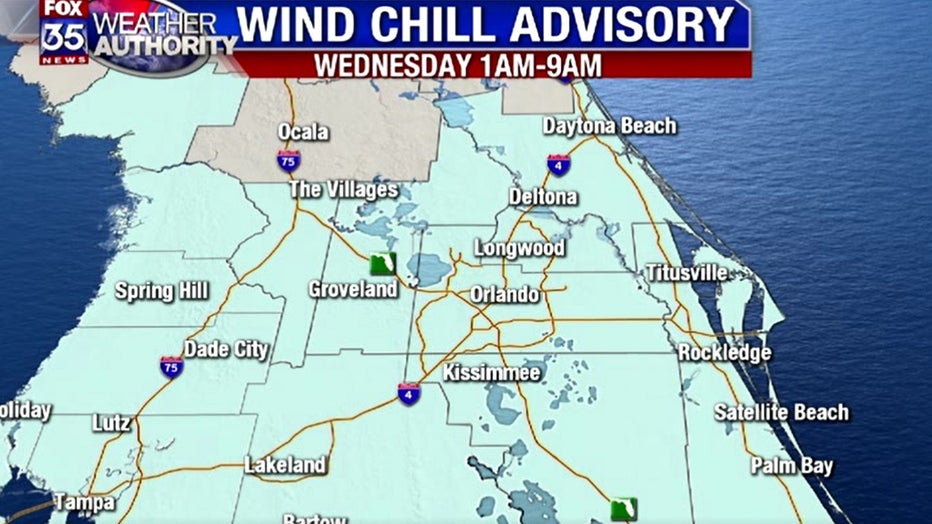 As the sun goes down this evening, temperatures will drop. Skies will be mostly clear tonight and winds will remain a little breezy. Temperatures in the 30s and 40s will be the norm on Tuesday morning, making things a little brisk for the kids heading out to the bus stops for sure.

The coldest air through the whole event will arrive by Tuesday into Wednesday morning. For many locations, it will be the coldest levels so far this winter in Central Florida. North Central Florida will likely see lows in the 20s and active freeze warnings are expected during this time.

RELATED:  Here's what to do with your plants during cold weather

"A freeze is likely on Monday night, north and west of metro Orlando," said FOX 35 Chief Meteorologist Glenn Richards. "On Tuesday night, we're expecting near-freezing temperatures up around the Apopka area, so that would include Lake County and portions of Flagler, Orange, Seminole and Volusa counties."

Now is the time to prepare for freezing temperatures, checking on plants, pets, pipes, and swimming pools.  Also, be sure to use space heaters safely.

By Thursday and Friday, Central Florida could see a slight warm-up in the 70s.

Get the latest on the cool temperatures, the latest freeze warnings and watches, and more by downloading the FOX 35 Weather App.