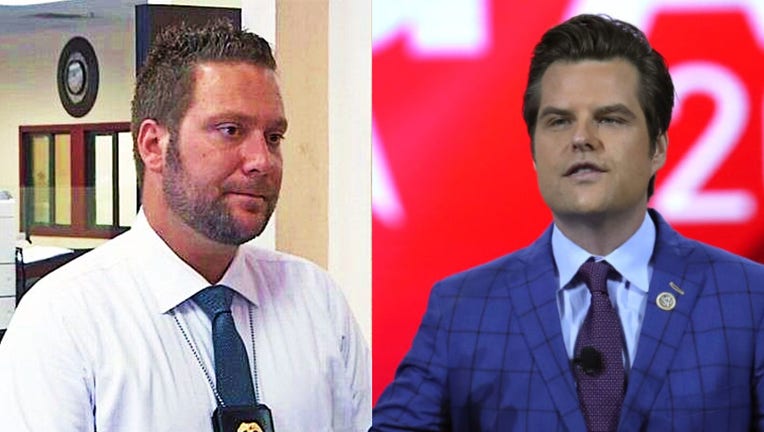 A former Florida tax collector who is facing a slew of criminal charges has been assisting federal investigators with information on Rep. Matt Gaetz's encounters with women since at least 2020, according to a new report.

Joel Greenberg, the indicted former tax collector in Seminole County, Florida, disclosed to investigators that he and Gaetz had encounters with women who were given cash or gifts in exchange for sex, The New York Times reported. The feds are reportedly investigating whether Gaetz paid the women who were recruited online for sex and whether he had sex with a 17-year-old woman.

Gaetz, the outspoken GOP Florida congressman and backer of former President Donald Trump, has repeatedly denied any wrongdoing and has pledged to stay in office.

Greenberg faces 33 counts including stalking a political opponent, sex trafficking of a minor and conspiracy to bribe a public official. During a court hearing last week, lawyers indicated that Greenberg was working on a plea deal.

"I am sure Matt Gaetz is not feeling very comfortable today," Fritz Scheller, Greenberg's attorney, told reporters afterward when asked if Gaetz should be worried.

A spokesperson for Gaetz, Harlan Hill, reiterated Gaetz's repeated denials of wrongdoing and blamed "peddlers of fake news" for putting out allegations against the congressman with "zero evidence."

"Congressman Gaetz has never paid for sex. Based on reporting from Politico, it seems Mr. Greenberg has been trying to ensnare innocent people in his troubles for quite some time," Hill said in a statement Wednesday to Fox News.

Hill pointed to undercover reporting from the right-wing guerilla news outlet Project Veritas that caught a CNN staffer admitting that his network has been deploying "propaganda" in an effort to damage Gaetz.

"It’s unsurprising that as news breaks of CNN staff admitting to a concerted media propaganda effort against Rep Gaetz, the three biggest peddlers of fake news in the business drop another non-story," Hill said. "Is the media just going to continue running the same — anonymously ‘sourced’ — stories every day, repackaged, in order to avoid admitting the obvious ... that over the past two weeks they hyped charges and allegations that Rep. Gaetz has repeatedly denied and that there remains zero evidence of?"

Meanwhile, Politico reported that investigators are honing in on a 2018 Bahamas weekend getaway Gaetz and others took that involved at least five young women.