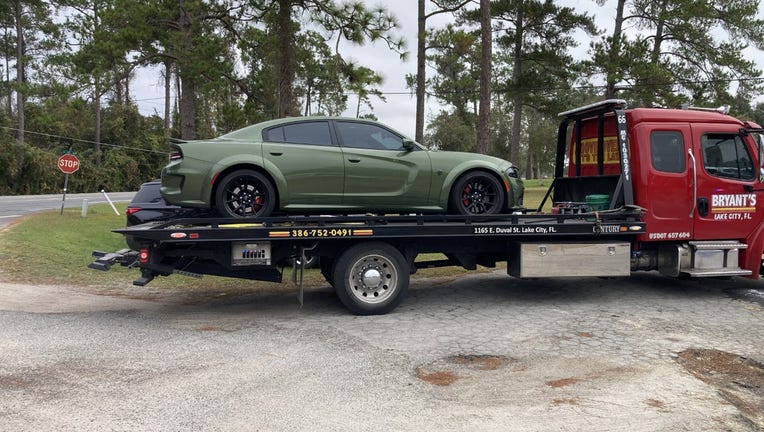 Three people — among them a teen — were arrested for taking Florida Highway Patrol and multiple other agencies on a high-speed pursuit after stealing multiple cars.

Around 6:23 a.m. Friday, two vehicles that were reported stolen out of Jacksonville were traveling north on I-75 in Sumter County. The owner was tracking the two stolen cars; a 2018 Jeep Grand Cherokee and a 2022 Dodge Durango. The owner found that the Durango had stopped at an unknown location in Marion County, FHP said.

About 45 minutes later, a Florida Department of Agriculture Law Officer spotted the Grand Cherokee on I-75 north and attempted to stop it. The driver of the Jeep fled from the officer with a green Dodge Hellcat following close behind. Both cars fled north into Lowndes County, Georgia where the Jeep was abandoned in Lake Park, Georgia.

The Jeep driver and two other occupants got into the Hellcat and continued to travel north on I-75. When a Lowndes County Sheriff's Officer tried to stop the car, the driver turned around heading south on I-75 and back into Florida. Troopers recorded the Hellcat traveling at speeds up to 160 mph.

FHP deployed a spike stripe, disabling the car resulting in the three people in the car fleeing into nearby woods.

At 1:20 p.m., FHP said the last of the three suspects was taken into custody.

All three are facing charges of grand theft, fleeing and attempting to elude, obstructing justice, and dealing in stolen property.