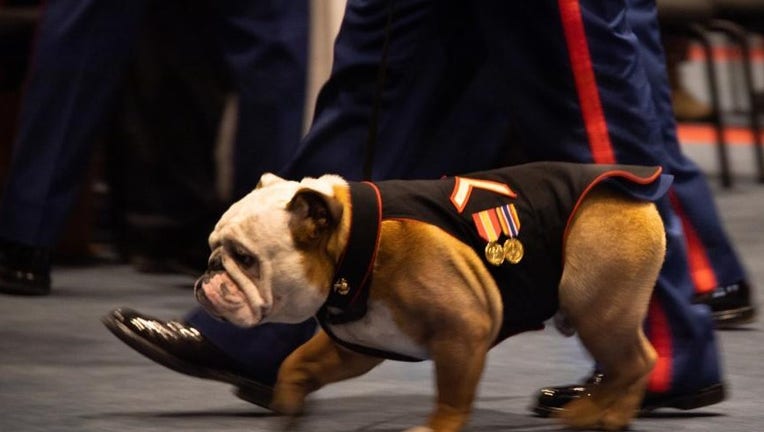 Pfc. Chesty XVI, mascot of the Marine Corps walks back to his seat during a promotion ceremony at Marine Barracks Washington, December 13th, 2022. Chesty XVI, was promoted to the rank of Private First Class by the Honorable Carlos Del Toro, Secretary

WASHINGTON - The U.S. Marine Corps’ top dog received a promotion Tuesday at a ceremony at the Marine Barracks Washington.

Chesty XVI, an English bulldog, was promoted to private 1st class by the Honorable Carlos Del Toro, secretary of the Navy.

According to the Marine Corps Times, Chesty donned a dress-blue Charlies-style onesie bearing an E-2 chevron.

"Since you relieved your predecessor, you’ve amassed a nearly spotless record," Del Toro said in the ceremony. "Literally. No spots on the rug, no sword biting, no assaults on your superiors and no barking in silent drill."

The Times reported Pfc. Chesty XVI enlisted into the military branch in February, succeeding Lance Cpl. Chesty XV, who was given a pardon and retirement after becoming a bit of a handful.

Col. Robert A. Sucher told the outlet that Chesty XVI has mostly obeyed orders. His handler, Cpl. Jesus A. Moras, said he hasn’t tried to jump on anyone — unlike his predecessor.