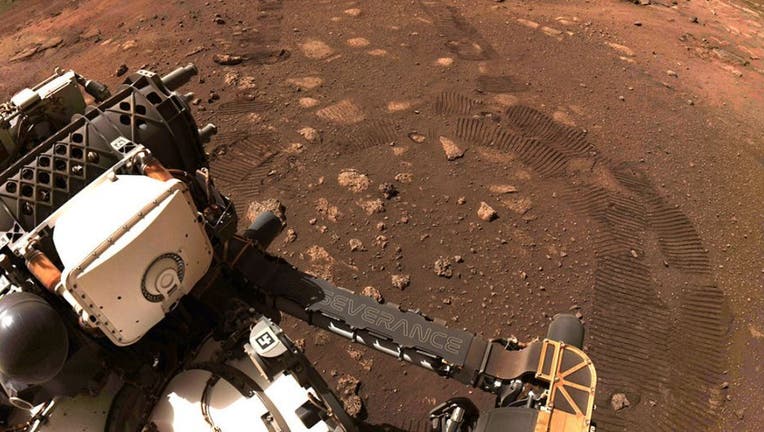 In their post on SoundCloud, NASA described the sound as "listening to a seashell or having a hand cupped over the ear.

They obtained the audio from the instrument on Feb. 19, around 18 hours after landing on the planet's Jezero Crater.

MOBILE USERS: Click here to listen to the first sounds of wind captured on Mars

"The rover’s mast, holding the microphone, was still stowed on Perseverance’s deck, and so the sound is muffled," they explained.

MORE NEWS: The moon has a tail that sends beams across Earth, researchers say

In the second clip, listeners can hear laser impacts on a rock target in audio that was taken on March 2.

"The sounds of 30 impacts are heard, some slightly louder than others. Variations in the intensity of the zapping sounds will provide information on the physical structure of the targets, such as its relative hardness or the presence of weathering coatings," NASA wrote in a caption. "The target, Máaz ('Mars' in Navajo), was about 10 feet (3.1 m) away."

Both recordings were taken using the rover's SuperCam, which is a rock-vaporizing instrument mounted on the "head" of the rover's mast that will help scientists hunt for fossils on the red planet.

In the clip with audible wind, the mast on which the microphone sits was still stowed, muffling the sound, which Institut Supérieur de l’Aéronautique et de l’Espace (ISAE-SUPERAO) researcher and planetary scientist Naomi Murdoch discussed during a joint news conference with Centre National D’Etudes Spatiales (CNES) and NASA on Wednesday.

"First of all, on the surface of Mars, we have a very low atmospheric pressure. It's actually 150 times lower than on Earth. In addition, the atmosphere is made up of carbon dioxide," Murdoch explained. "And, these two factors together mean that sound doesn't propagate in the same way on the surface of Mars as it does on Earth."

TRENDING: Asteroid Apophis: Huge space rock to pass by Earth, even closer in 2029

"For that reason, the SuperCam microphone is particularly sensitive. And this allows us to record sounds despite the strong attenuation in the Martian atmosphere," she said.

The Mars 2020 rover marks the third time the microphone was sent to Mars.