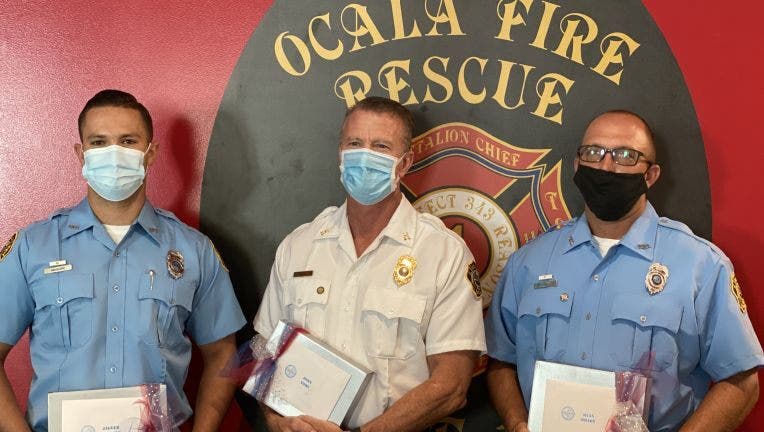 OCALA, Fla. - Five Ocala Fire Rescue members were honored as Hometown Heroes for their live-saving actions and ideas during two fires and the coronavirus pandemic.

The men were honored during the 3rd annual Hometown Hero Awards presented by Hires-Baxley in early October.

Three firefighters who work at Fire Station One received Act of Valor awards for rescuing two people from an apartment fire in August.

“The entire unit was black thick smoke coming out,” Field Equipment Operator Ryan Brady recalled about the day of the fire. He said before the crew arrived on scene they knew there was an elderly man trapped inside.

Captain John Toms said he was part of the team assigned to go inside the burning building to rescue the man.

“The smoke was so thick in the corridor and when I went into that room I didn’t find anyone.”

Captain Toms said he continued searching and eventually found the man in a bedroom.

“It was a surprise… He could stand but he couldn’t walk very well so I had to wrap around him, tell him to hold his breath. Let’s go.”

EFO Ryan Brady and EFO Jagger Maguire got a surprise of their own when they discovered a second man trapped on the second floor.

“He just opened the window and there he was,” EFO Brady said.

“As soon as we saw him he looked like he was about to jump,” EFO Maguire said. “When we went to get that ladder our hearts were racing and we wanted to get that guy out of the window.”

The trio saved both men and one of them was treated on scene for smoke inhalation.

“What they did, we get a handful of times throughout our career,” said Ocala Fire Chief Shane Alexander, calling the firefighters extraordinary and heroic. “For you to respond, be trained and to save someone’s life in a burning building, it might only happen two or three times in a career.”

Captain Jesse Blaire was honored as a Hometown Hero for his live-saving proposal to create firefighter COVID-19 strike teams.

“We wanted to try to come up with ways to meet people where they are.”

EFO Brady was humbled and grateful to receive the Act of Valor award but said ultimately, they just doing their job.

“We’ll do it again today if we have to. We’ll do it 20 years from now if we got to. It’s our responsibility.”

Captain Blaire was instrumental in getting 15 firefighters trained to administer COVID-19 tests and drop them off at the Marion County Department of Health. The firefighters were dedicated to responding to nursing homes and the homes of vulnerable people without transportation in order to administer the tests.

“The strike teams would identify people who were at risk and we went to them,” Captain Blaire said. “For that person to be transported to the hospital in an ambulance and then be at the hospital would expose them to more infection.”

Captain Blaire said the strike teams have tested nearly 400 people. “I’m sure out of that 390 people that we saved at least a few of the most vulnerable populations of being infected.”

Firefighter Shante Nichols was recognized for his courageous actions alerting a couple to a fire at their home while he was off-duty. Nichols said he was leaving the barbershop when he noticed a column of smoke in the air and checked it out.

Nichols said he saw a vacant house on fire and the neighbor’s house was also catching fire.

“I immediately pulled my car forward, got it out of the way and ran back.”

He said he knocked on the neighbor’s door and alerted the homeowner to the fire.

“He didn’t know his house was on fire. He and his wife were inside watching TV. So I got them out, searched his house.”

Firefighter Nichols then helped responding firefighters put out the fire. Nichols said he was honored to be recognized as a Hometown Hero.

“It’s always about helping someone. I mean, if you see someone in trouble or needing help it’s always a rewarding feeling.”