Whale euthanized after beaching itself on New Smyrna Beach

SeaWorld researchers told FOX 35 that they examined the whale and found evidence of heart failure.

NEW SMYRNA BEACH, Fla. - A small whale that washed ashore in New Smyrna Beach was euthanized on Friday, according to marine officials.

Photos taken at the beach show people pouring water on the whale until wildlife experts showed up. 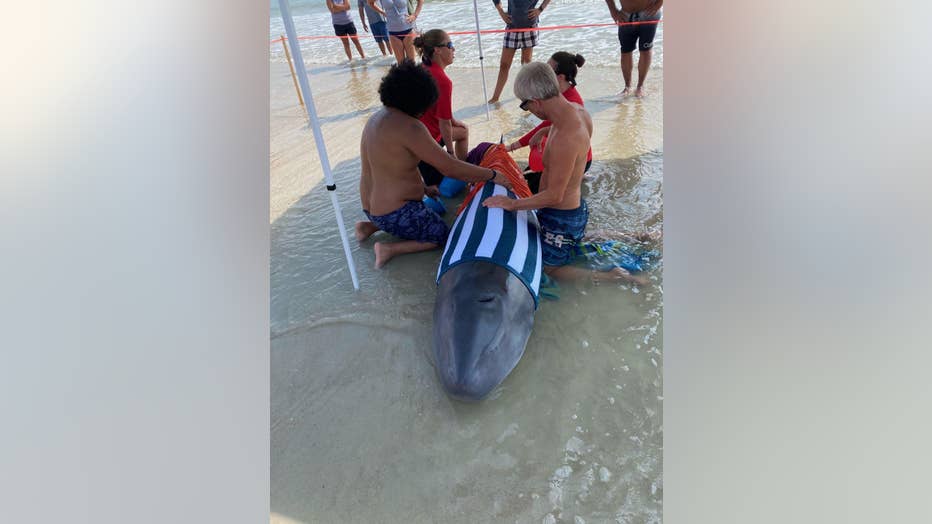 According to beach safety, the Marine Mammal Stranding Team, along with Hubbs SeaWorld responded and decided that the whale needed to be euthanized.

A researcher at the Hubbs SeaWorld Research Institute who was on scene Friday morning said they had to euthanize the whale because he had heart failure.

"The animal was in very bad shape when the veterinarian evaluated it," said Wendy Noke Durden, a research scientist with the Hubbs-SeaWorld Research Institute. "He wasn’t able to breathe very well, very lethargic on the beach. A healthy animal would be moving around some."

She says this species is hard to study because they’re deep-sea creatures but says that more than half of the pygmy sperm whales that are stranded ashore suffer from heart disease.

"Typically those animals are deep-diving that live far offshore, and when we do see them on the beach, it’s usually because they’re very sick and in the process of dying," Durden said. "We archive samples of every stranding we have so we have a large sample size to actually tell something about the species, and maybe down the road, our efforts will be helpful in future efforts to rehabilitate the species."