Skywatchers across the northern hemisphere had the chance to see a partial eclipse of the sun on June 10, 2021. Israel Joffe shared the view from North Bethesda, Maryland. Credit - Israel Joffe via Storyful

NORTH BETHESDA, Md. - Skygazers across the northern hemisphere were treated to another astronomical phenomenon early Thursday, likened by one Maryland resident to the computer game character Pac-Man.

A solar eclipse occurs when the moon moves between the sun and Earth. This casts a shadow on our planet, either fully or partially blocking the sun’s light in some areas, the agency said.

During an annular eclipse, the moon is far enough away from Earth that it appears smaller than the sun in the sky — creating what looks like a "ring of fire" around the moon. NASA said the "ring of fire" event would only be visible to people in parts of Canada, Greenland and northern Russia.

The "ring of fire" is a type of solar eclipse where the moon partially blocks the sun's light on Earth.

In some places, such as North Bethesda, Maryland, skywatchers may not have witnessed the ring around the moon but instead got to experience a partial solar eclipse. This happens when the sun, moon and Earth are not exactly lined up, and the sun appears to have a small dark shadow on its surface.

"Incredible," Joffe wrote in a tweet, using the hashtag #PacMan. 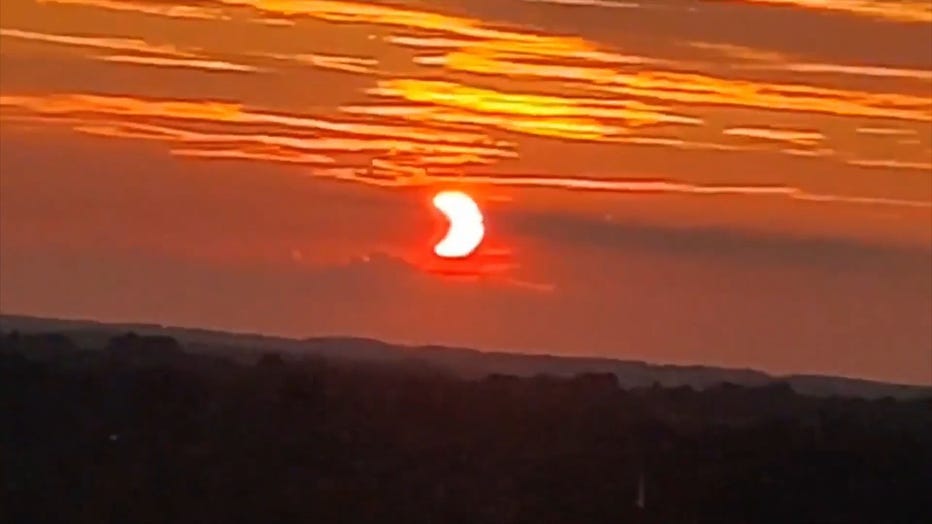 A screengrab from a video shared by Israel Joffe shows the partial solar eclipse that occurred during sunrise on June 10, 2021, in North Bethesda, Maryland. (Credit: Israel Joffe via Storyful)

For anyone who hopes to view a solar eclipse, the American Astronomical Society cautions people to wear eye protection, such as eclipse glasses.

Space.com mentions never to look at the sun without proper equipment, saying it’s never safe to look directly into the sun’s rays.

The last total solar eclipse visible in the U.S., where the moon completely blocks the sun, occurred in August 2017. The next solar eclipse will take place on Dec. 4, according to NASA.

This story was reported from Cincinnati. Meteorologist Stephanie Weaver contributed.