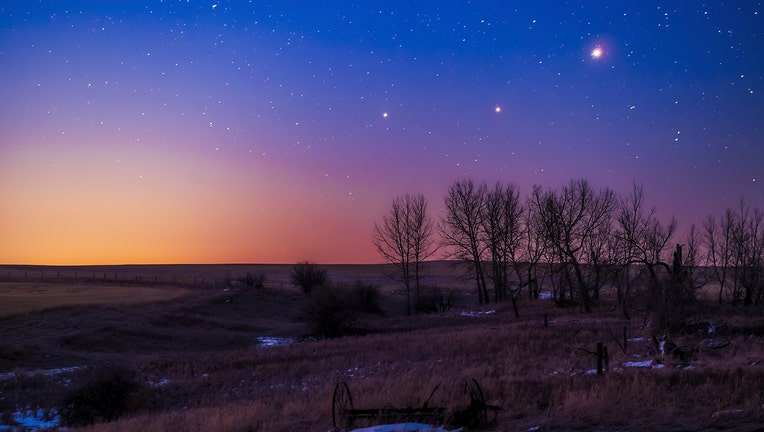 The trio of (L to R) Saturn, Mars and Jupiter in conjunction in the dawn twilight, taken from home in Alberta on March 26, 2020.

LOS ANGELES - If you missed last month’s "Christmas star," you’ll have another chance to see a spectacular planetary phenomenon in January.

For the first time since October of 2015, sky-gazers will have the chance to view a planetary trio — when three planets will be bunched together in the atmosphere.

What is a planetary trio?

According to EarthSky, a planetary trio consists of three planets "fitting within a circle whose diameter is less than 5 degrees in width."

On Christmas Day, Jupiter and Saturn aligned at the closest distance in 400 years, and now the slow-moving planets will soon both fade from view. But before their exit, they will be joined by the planet Mercury for a short, yet exciting triple conjunction.

At dusk Jan. 8-11, you can observe Jupiter, Saturn and Mercury in the sky.

"All three worlds pop out low in the west, close to the sunset point on the horizon. Jupiter will be the brightest of the three, followed by Mercury and then Saturn," EarthSky wrote.

The tightest grouping of the three planets will be on Jan. 10.

Jupiter and Saturn seen close together over Dublin, Ireland on Sunday.

Start your search for the planetary trio just after sundown.

You may be able to see the phenomenon with the naked eye, but "depending on your sky conditions and use of optical aid (binoculars), you should be able to watch this planetary trio for several days to a week," EarthSky said.

To further maximize your opportunity to see the planets, make sure to find an unobstructed view of the horizon in the direction of the sunset.

"Although all these worlds are bright – especially Jupiter – they’ll be contending with the afterglow of sunset. You might need your binoculars to catch one or two of these planets, especially Saturn," EarthSky wrote.

The next planetary trio will make an appearance Feb. 13, featuring Mercury, Jupiter and Venus.