Ten members of the royal family, led by Prince Charles and his sister, Princess Anne, walk behind the specially designed Land Rover carrying the coffin on the eight-minute journey from the State Entrance of Windsor Castle to St. George’s Chapel.

The funeral for Prince Philip, the Duke of Edinburgh, took place Saturday at Windsor Castle.

The service was a slimmed-down version of what had been planned. Because of the COVID-19 pandemic, it was entirely closed to the public.

The funeral for Queen Elizabeth II's husband, who died April 9 at 99, included a procession of the coffin from the State Entrance of Windsor Castle to St. George’s Chapel. Prince Charles, the heir to the throne and the father of the princes, together with his sister, Princess Anne, led the 15-member procession.

The procession marked the first public reunification for the royal family since the airing of Prince Harry and Meghan’s interview with Oprah Winfrey.

In the explosive interview, the couple said royal staffers were insensitive toward Meghan and that an unidentified member of the royal family made racist comments. Meghan, who is pregnant, remained in California Saturday on her doctor's advice.

Princes William and Harry didn't line up shoulder to shoulder as they took their places for the procession, which the palace had already announced as part of the line-up. Palace officials refused to comment though when asked whether the positioning of William and Harry was an effort to minimize family tensions.

William and Harry’s cousin Peter Phillips stood between the princes as they escorted the coffin. 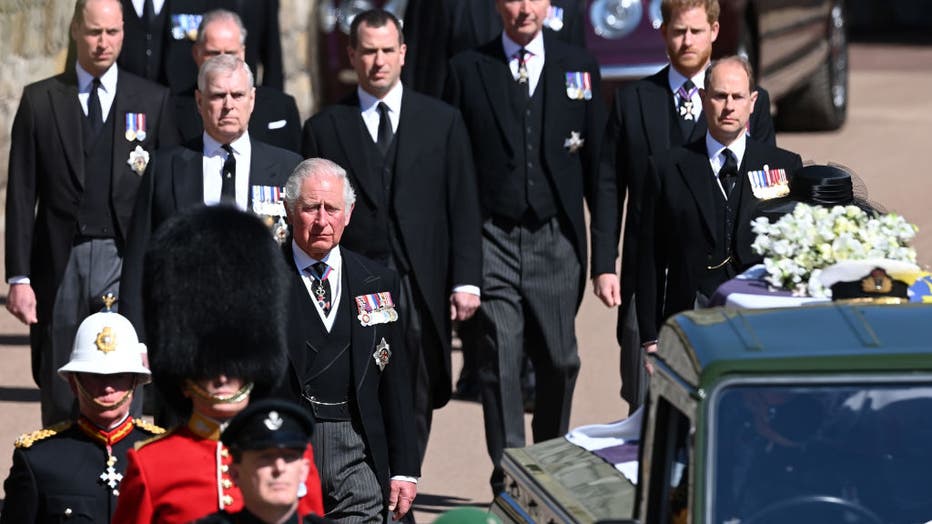 WINDSOR, ENGLAND - APRIL 17: Prince Charles, Prince of Wales walks behind The Duke of Edinburgh’s coffin, covered with His Royal Highness’s Personal Standard, during the Ceremonial Procession during the funeral of Prince Philip, Duke of Edinburgh at

The arrangement minimized the chances of any awkward moments between the brothers, who have faced strains in their relationship since Harry’s decision to step away from royal duties last year.

During the service, which took place inside St. George's Chapel, William and his wife Kate sat directly opposite Harry. The distance in the church between the 30 family members that attended was due to COVID-19 safety precautions.

The queen sat alone in her usual position in the quire of the chapel. Charles sat opposite the monarch alongside his wife Camilla. Prince Andrew was closest to the queen, at two seats to her left.

William and Harry were seen together when the funeral service concluded. They walked side-by-side out of the chapel and were seen exchanging words. Catherine was walking alongside them as well. 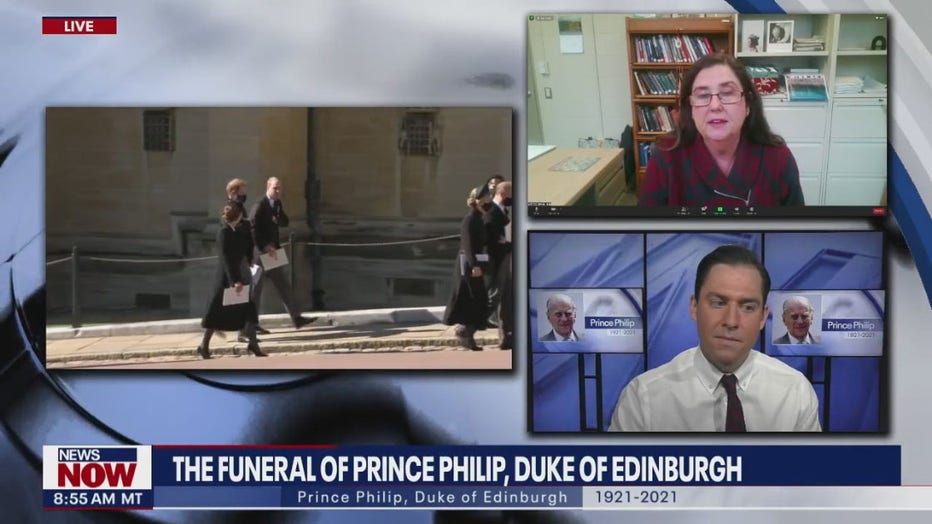 Rumors of a rift between the brothers have rumbled at least since 2019. That's when Harry and Meghan separated from the Royal Foundation, originally set up as the brothers’ joint charitable venture, to set up their own platform. That year, Harry said he loved his brother dearly but they were "on different paths" and have "good days" and "bad days."

Many believe that William was angered and hurt by Harry’s decision to speak so publicly about the royal family's issues during the Winfrey interview. In one explosive allegation, they said a family member — not the queen or Philip — had expressed "concerns" about Archie's possible skin color before he was born. Meghan has a Black mother and a white father.

Days after the interview aired, William insisted "we are very much not a racist family," and said he had not spoken to Harry since the broadcast.

It's unclear whether the passing of their grandfather will help the brothers heal their rift. It wasn’t immediately clear how long Harry, who has been self-isolating in line with the U.K.'s coronavirus restrictions since arriving from California early this week, will stay in his home country.

The funeral for Prince Philip, the Duke of Edinburgh, took place Saturday at Windsor Castle. The service was a slimmed-down version of what had been planned. Because of the COVID-19 pandemic, it was entirely closed to the public.

Philip has now been interred in the Royal Vault at St. George’s Chapel alongside the remains of 24 other royals, including three kings of England. But it will likely not be his permanent resting place.

After the death of the queen, she and Philip are expected to be buried in the Royal Burial Ground on the Frogmore Estate close to Windsor Castle.