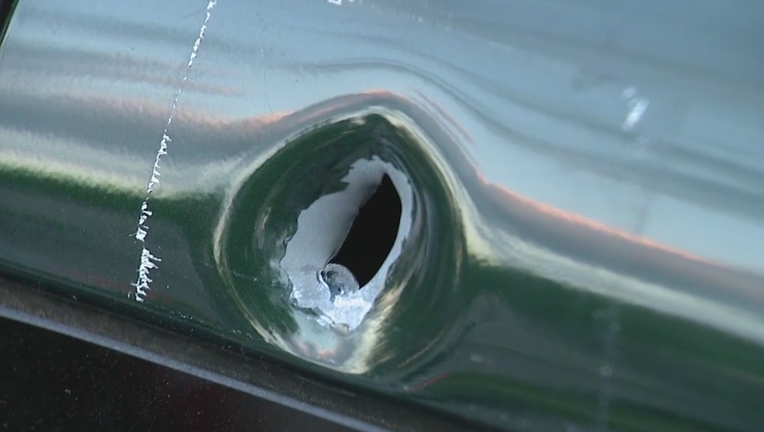 DELAND, Fla. - Florida Highway Patrol is investigating a shooting in Volusia County where a truck traveling on Interstate 4 was struck by a bullet.

The victims say it happened in broad daylight over the weekend.

"Right about that time - I heard a loud bang on my truck," said Brad, who was driving.

His girlfriend, Kim, was in the passenger seat.

"I thought we ran over something," she said.

The Seminole County couple says it all began during a drive to the Daytona Speedway Sunday to catch some racing.

Heading east on I-4 in Volusia County a little before noon, they say they caught a glimpse of three SUVs speeding down the interstate - possibly involved in some sort of road rage.

"Couple miles up, traffic came to an abrupt stop. And I rolled up next to them – they were on my left in the fast lane," Brad explained.

Brad and Kim, who asked us not to show their faces or share their full names, say they got stuck in between the feuding cars.

"They both swerved into the emergency lane," Brad said. Then he heard a loud bang.

A bullet landed just above his back window.

"We were supposed to bring our 9-year-old son. He would have been right in the back seat," Kim said.

Luckily, the couple says a cross brace pushed the bullet up, preventing it from landing inside the truck.

They pulled over and called 911, Troopers are still looking for the shooter.

"Does that person even realize he hit something? Or does he think it ricocheted and went into the ground," Kim wondered.

"I was always taught that no matter how far that bullet goes – you’re responsible wherever it stops. And unfortunately, it was my truck. It could have been a lot worse," Brad said.

Troopers say the driver of the SUV that was likely the intended target did contact FHP to provide a statement. No arrests have been made.