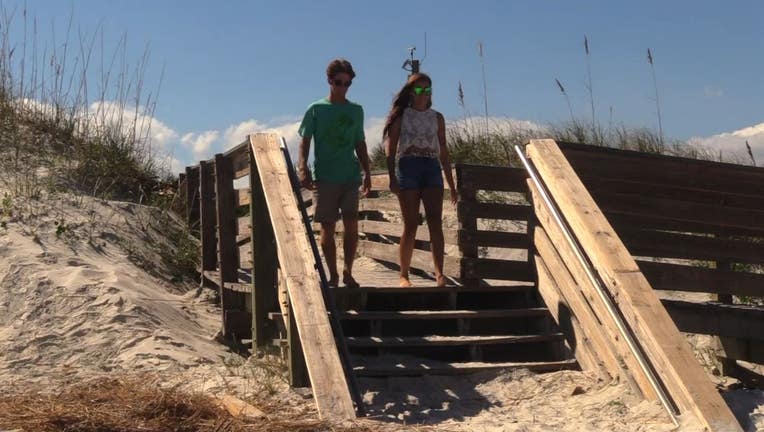 Clark spoke with FOX 35 News as he visited the beach town with his fiancée for the first time since he was bitten by a shark over the Fourth of July weekend.  It happened while he was surfing near the jetty, a spot known for good waves but notorious for shark bites. Clark recalls what he remembers from that day.

"My adrenaline kicked in. I wasn’t sure of my surroundings too much. I just knew I couldn’t move my foot, and I was just hoping he wouldn’t come back," he said.

We spoke to Clark right after it happened. He had to get 11 stitches and spent three weeks on crutches. Unable to do much, his fiancée, Zelia Burnett, stepped in to care for him.

"We had just moved into a second-story place, so I had to help him up the stairs. I was doing a lot of the heavy lifting," she said.

Now four months later, Clark still hasn’t surfed by the jetty. Instead, he says he chooses to surf in calmer waters. He says someday he’ll surf by the jetty.

When that day comes, Zelia says she’ll be on guard.

"I have to go, and I’m going to watch him with binoculars every move for sure," he said.

But let it be known, Clark has no plan to give up or slow down on surfing.

"Surfing is Pat’s hobby, his passion, he’s addicted to it," said Burnett.

In fact, he hopes to turn his experience, including the shark bite, into a book to help others who want to learn to surf.

"Hoping that they would take up this passion or hobby or sport or addiction because it means a lot to me, you know?," he said.