A popular social media influencer, known to many as "Ali Spice" was one of three people killed in a crash caused by a suspected wrong-way driver in Volusia County. The Florida Highway Patrol said the driver ran into the nearby woods after the collision happened and is still on the run. We spoke to the victim's family who is pleading for justice.

James Dulin confirmed to FOX 35 News on Tuesday that his daughter, Alexandra, was one of the victims. The 21-year-old woman was a popular influencer across social media known as "Ali Spice" with a presence on a number of platforms including TikTok and Instagram.  "It’s still not real. We still have moments of disbelief," Dulin said.

He last spoke to his daughter on Saturday afternoon, who was planning her trip home to Indiana for Christmas.  Dulin said his daughter was just home for Thanksgiving.

"I guess with my daughter you always stake a lot of pictures. But man, we took a lot of pics over Thanksgiving, and who knew that those were the last pictures that we would take? At least together," Dulin said.

Troopers with the Florida Highway Patrol (FHP) said that just after 2 a.m. on Sunday, a driver going the wrong way on State Road 44 slammed into the Infiniti in which Ali was riding, Dulin said.  She and the two other passengers died.  Troopers said the driver of the Infiniti suffered serious injuries.  Investigators said after the crash, the driver of the Toyota Tacoma who caused the crash ran from the scene, leaving a passenger behind in his car.

So do Ali’s fans on social media.  Countless tributes to the petite blonde have been posted on various social media platforms, sharing their condolences with her family.  "We all knew she was big, but my goodness gracious, I had no idea how big until whomever took us from this family and her social media world," Dulin said. 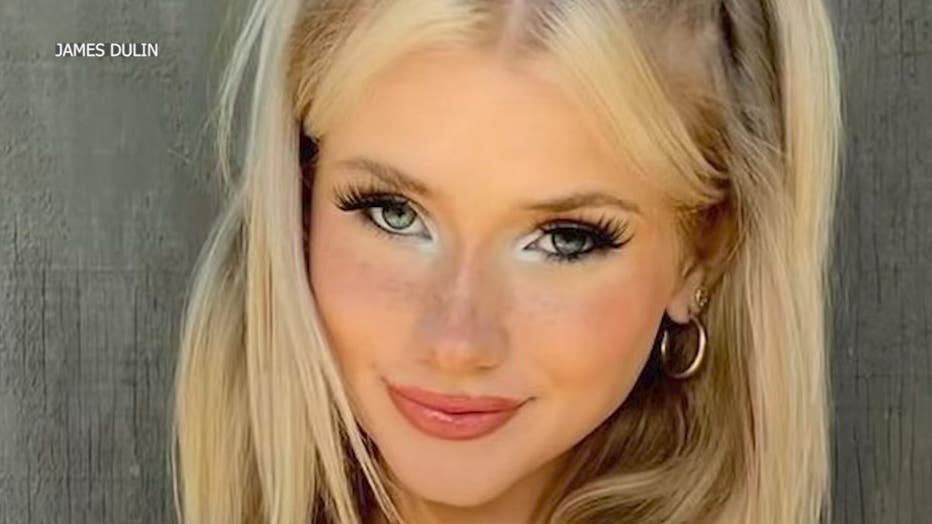 Alexandra Dulin, 21, was a popular influencer across social media known as “Ali Spice.” She died in a hit-and-run, wrong-way crash in Florida on Dec. 11, 2022. [Credit: James Dulin]

Dulin said his daughter’s main focus was her social media accounts and that she worked at Hooters for fun. Ali had started college majoring in fashion design when she was approached about modeling.  Dulin said she dropped out of college when her modeling and social media took off.  He joked that he wishes some of Ali’s clothing was a bit bigger but added that he is very proud of what she accomplished.

"She was a hard-working proud young lady who carved out her own entrepreneurial path… and she did it on her own," Dulin said. "She knew how to blend a message of helping people, and she knew when she needed to I don’t know if you want to call it spice it up and get more eyeballs."

Dulin said initially his daughter’s followers were mostly men, but she worked hard to diversify her audience.  "She had purposefully built up a following, so she had a voice, and then when she had the voice she used the voice to try to help girls," Dulin said.

Ali’s followers are now helping to spread the word that the driver accused of causing the deadly crash is still on the run.  They are hoping it helps troopers find that suspect.

"It’s unbelievable to know how much perfect strangers could care about our 21-year-old daughter," Dulin said.  He tells FOX 35 News that he and his wife have been contacted by people they don't even know who have sent scores of text messages offering their condolences, flowers, or food.

FHP said the suspect's car has been impounded.  They are working to get a search warrant, so they can collect evidence, which they hope will pinpoint who was driving at the time of the fatal crash.