President Biden laid out details of the Student Loan Debt Plan, forgiving $20,000 of debt for Pell Grant recipients and $10,000 for all other student loan borrowers. The payment pause has also been extended one more time through December 31, 2022.

WASHINGTON - With the freeze on student loan payments set to expire soon and pressure from Democrats to provide broader relief, President Joe Biden on Wednesday announced a wide-sweeping debt cancellation program in which many could get $10,000 forgiven — and even more for those with the greatest financial need.

Biden on Wednesday shared a few details of the plan, which says borrowers who earn less than $125,000 a year will be eligible for the loan forgiveness. Those who received Federal Pell Grants, a form of need-based federal financial aid, can get $20,000 of loan forgiveness.

He cited the increasing cost of higher education as a reason to forgive the debt.

"The cost of education beyond high school has gone up significantly. The total cost to attend a public four-year university has tripled in 40 years," he said.

"The Pell Grants used to cover 80% of the cost of going to a public, four-year college. Today, Pell Grants cover roughly 32%. That’s one-third of the cost as opposed to before. That matters."

Biden is also extending a pause on federal student loan payments for what he called the "final time" through the end of 2022. He was set to deliver remarks Wednesday afternoon at the White House to unveil his proposal to the public.

More than 43 million Americans owe a combined $1.6 trillion in student debt held by the federal government, according to data from the Education Department. That includes more than 7 million borrowers who have defaulted on student loans, meaning they are at least 270 days late on payments.

With inflation at its hottest level in four decades, a shrinking U.S. economy, and climbing interest rates, repaying student loans could become even more challenging for borrowers. Biden’s student loan forgiveness plan is likely to face legal challenges, but if it survives, the plan could offer some welcome relief to a swath of the nation. 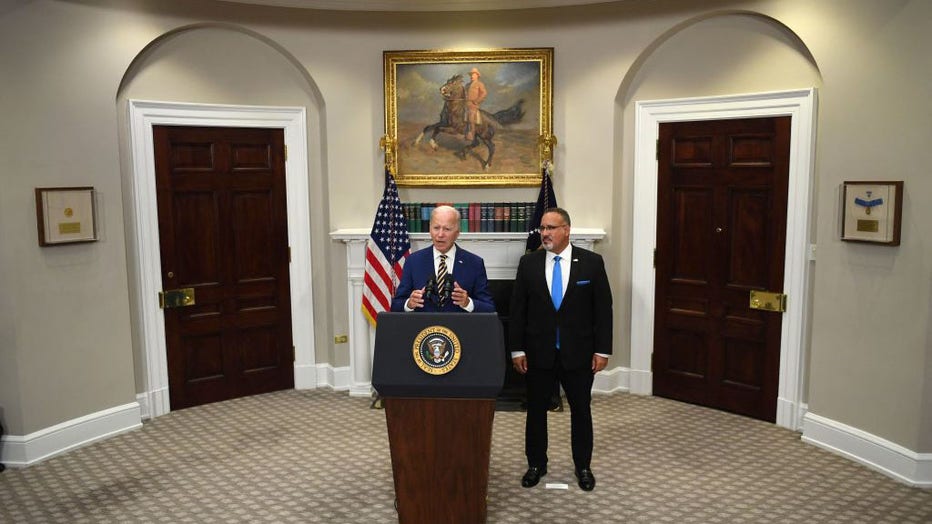 Payments for federally backed student loans have been suspended since the COVID-19 pandemic began in March 2020.

The Biden administration will freeze federal student loan payments through Aug. 31, extending a moratorium that has allowed millions of Americans to postpone payments during the pandemic.

The current pause had been set to end on Aug. 31, and with Biden’s actions on Wednesday, this is the closest the administration has come to hitting the end of the payment freeze extension.

Interest rates will remain at 0% until repayments start. Under an earlier extension announced in April, people who were behind on payments before the pandemic will automatically be put in good standing.

How will people apply for student loan forgiveness?

Details of that have not yet been announced.

Last month, top U.S. Education Department officials developed a plan for a mass debt cancellation program, should the department get the green light from Biden, according to Politico.

Under the plan, debt relief would be provided automatically and within several months to millions of borrowers for whom the agency already has income information. Other borrowers would apply through a form on StudentAid.gov, Politico reported, citing internal agency documents obtained by the news outlet.

What is a Pell Grant?

Pell Grants are special government scholarships for lower-income Americans, who currently can receive up to $ $6,895 annually for roughly six years.

Pell Grants themselves don’t generally have to be paid back, but recipients typically take out additional student loans.

To find out if you have a Pell Grant, check any emails you've received that describe your FAFSA award.

Can those who have paid off student loans get money back?

The debt forgiveness is expected to apply only to those currently holding student debt.

But if you’ve voluntarily made payments since March 2020, when payments were paused, you can request a refund for those payments, according to the Federal Office of Student Aid.

During the 2020 presidential campaign, Biden was initially skeptical of student loan debt cancellation as he faced off against more progressive candidates for the Democratic nomination. Sens. Elizabeth Warren, D-Mass., and Bernie Sanders, I-Vt., had proposed cancellations of $50,000 or more.

As he tried to shore up support among younger voters and prepare for a general election battle against President Donald Trump, Biden unveiled his initial proposal for debt cancellation of $10,000 per borrower, with no mention of an income cap.

Biden narrowed his campaign promise in recent months by embracing the income limit as soaring inflation took a political toll and as he aimed to head off political attacks that the cancellation would benefit those with higher take-home pay. In April, Biden said he would take a "hard look" at canceling some federal student loan debt following private meetings with Democratic lawmakers who pressed him on the issue.

The frenzied last-minute lobbying continued Tuesday even as Biden remained on his summer vacation. Senate Majority Leader Chuck Schumer, D-N.Y., one of the loudest advocates in recent years for canceling student loan debt, spoke privately on the phone with Biden, imploring the president to forgive as much debt as the administration can, according to a Democrat with knowledge of the call.

In his pitch, Schumer argued to Biden that doing so was the right thing morally and economically, said the Democrat, who asked for anonymity to describe a private conversation.

Inside the administration, officials discussed since at least early summer forgiving more than $10,000 of student debt for certain categories of borrowers, such as Pell Grant recipients, according to the people with knowledge of the deliberations.

President Joe Biden is expected to announce a much-anticipated loan forgiveness program Wednesday, sources familiar with the plan told the Associated Press. Americans are poised to foot a nearly $300 billion deal with President Biden’s expected announcement to forgive thousands in federal student loan debt and extend a repayment pause to next year. According to the Penn Wharton Budget Model, a one-time maximum debt forgiveness of $10,000 for borrowers who make less than $125,000 will cost around $300 billion for taxpayers. The cost increases to around $330 billion if the program is continued over the standard 10-year window, according to the figures. The precise details of Biden's plan were being kept to an unusually small circle within the Biden administration and were still not finalized on the eve of the announcement, sources told the Associated Press.

Democrats are betting that Biden, who has seen his public approval rating tumble over the last year, can help motivate younger voters to the polls in November with the announcement.

Although Biden’s plan is narrower than what he initially proposed during the campaign, "he’ll get a lot of credit for following through on something that he was committed to," said Celinda Lake, a Democratic pollster who worked with Biden during the 2020 election.

She described student debt as a "gateway issue" for younger voters, meaning it affects their views and decisions on housing affordability and career choices. A survey of 18- to 29-year-olds conducted by the Harvard Institute of Politics in March found that 59% of those polled favored debt cancellation of some sort — whether for all borrowers or those most in need — although student loans did not rank high among issues that most concerned people in that age group.

What do critics of student loan forgiveness say?

Republicans see only political upside if Biden pursues a large-scale cancellation of student debt ahead of the November midterms, anticipating backlash for Democrats — particularly in states where there are large numbers of working-class voters without college degrees.

Critics of broad student debt forgiveness also believe it will open the White House to lawsuits, on the grounds that Congress has never given the president the explicit authority to cancel debt on his own.

The Republican National Committee on Tuesday blasted Biden’s expected announcement as a "handout to the rich," claiming it would unfairly burden lower-income taxpayers and those who have already paid off their student loans by covering the costs of higher education for the wealthy.

The debt forgiveness is expected to apply only to those currently holding student debt.

"My neighbor, a detective, worked 3 jobs (including selling carpet) & his wife worked to make sure their daughter got quality college degree w/no student debt," Rep. Kevin Brady, R-Texas, the top Republican on the House Ways and Means Committee, tweeted Tuesday. "Big sacrifice. Now their taxes must pay off someone else’s student debt?"

Earlier this year, many who work in public service got some welcomed relief from temporary changes made to the troubled U.S. Public Service Loan Forgiveness (PSLF) program. These changes helped more than 113,000 people get student debt relief, totaling around $6.8 billion in forgiveness, the government said in May.

The U.S. Department of Education in April also made changes to its income-driven repayment program, which was expected to bring immediate debt cancellation for at least 40,000 borrowers and help millions of others lower their debt.

Who qualifies for student loan forgiveness under the new changes?

Student loan debt in the US

The average federal student loan debt balance is $37,667, while the total average balance — including private loan debt — may be as high as $40,274, according to the Education Data Initiative, a higher education research group that publishes information and resources.

A large majority (92.7%) of all student loans are backed by the federal government, it adds.

On average, a student loan in the U.S. will accrue $26,000 in interest alone over 20 years, according to the Education Data Initiative. The average student borrower takes 20 years to pay off their student loan debt, and some professional graduates take over 45 years to repay their loans.