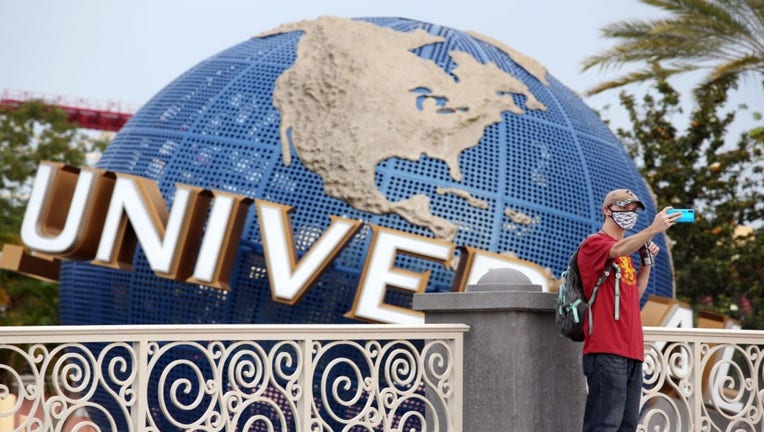 A visitor takes a selfie at Universal Studios theme park on the first day of reopening from the coronavirus pandemic, on June 5, 2020, in Orlando, Florida. (Photo by GREGG NEWTON/AFP via Getty Images)

ORLANDO, Fla. - Heads up, Florida residents! You can visit Universal Orlando for just $55 a day this holiday season.

The deal is listed on the Universal Orlando Resort website. It states that Florida residents can purchase a two-park, three-day, one-park per day ticket for just $164.99 plus tax. That comes out to $55 a day without the tax.

The deal is available between November 14th and January 3rd. Ticket purchasers have until March 26th, 2021 to use all three days. They can be used non-consecutively as well.

Blockout dates and restrictions apply and can be viewed on the Universal Orlando Resort website.

RELATED: New Universal Orlando hotel with nightly rates as low as $79 to open this December

They also note that the ticket offer is not available at the front gate of the park.

In addition, Universal Orlando Resort is discounting its annual passes up to $100 until December 17th. Passes start at $11 per month for a two-park seasonal pass with a down payment. Blockout dates and restrictions apply but there are also passes available without these that cost more.

Universal Orlando Resort reportedly begins its holiday celebrations at the parks on November 14th. For example, the streets of Hogsmeade and Diagon Alley will be decorated and feature special holiday performances, the Grinch will appear at Islands of Adventure in Seuss Landing, park guests at Universal Studios can see Macy's balloons up close, and the park will also have a celebration with parade floats and characters from fan-favorites like 'Despicable Me,' 'Shrek,' 'Madagascar,' and more.

For more information and to purchase tickets, visit the Universal Orlando Resort website.