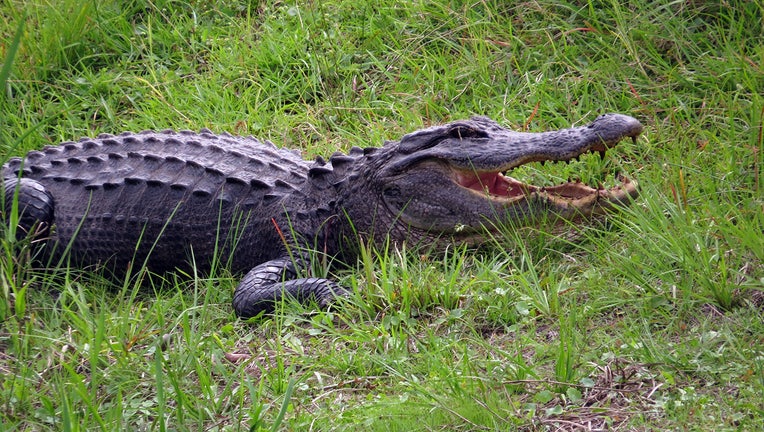 Alligator in the wild. (FWC photo by Karen Parker)

A fisherman in Florida had a very close call with an alligator, and he has a video to prove it.

Tommy Lee, 22, was tarpon fishing in the Everglades on Saturday morning when he came face-to-face with a bull alligator he believes was more than 11 feet in length.

Before the gator swam up to shore, Lee had been recording himself fishing with his GoPro.

In the two-minute video snippet he shared to his YouTube channel, Lee can be heard saying, "Jesus Christ. You gotta be careful here," when the gator slowly rose from the water.

As Lee tries to retreat from the gator, he stumbles backward but luckily regains his footing.

"Well that puts an end to my tarpon fishing," Lee said to himself while he is only a short distance from the animal.

When he tried to urge the gator to leave, Lee had to briefly run down the trail he was on.

In a statement provided to video content distributor Viral Hog, Lee wrote that the alligator had chased him and "got within 10ft" of me.

RELATED: ‘I owe you a new broom’: Hillsborough County deputy gives gator ‘joyride’ back to pond on broomstick

Lee’s video ends with a splash being heard and the gator can no longer be seen when he returns to the shoreline.

"And I am out of here," Lee said to himself before he grabs his blue fishing rod and turns the camera off.

Lee’s video under his "Chum Dumpster" channel has racked up more than one million views.

While most YouTube commenters wrote they were happy to see Lee was safe in the end, some were confused about why he walked back to the shoreline.

"I felt like I was watching a horror movie and screaming, ‘NO YOU FOOL, DON’T GO BACK! RUN,’" one commenter shared.