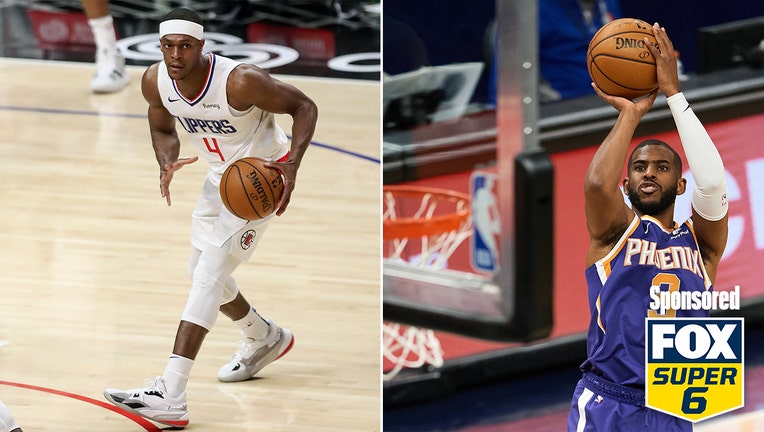 Roughly three weeks remain in the NBA’s regular season, and there are a lot of storylines dripping around the Association.

Will the Los Angeles Lakers get back on track when LeBron James is back? Can the Brooklyn Nets hold off Philadelphia and Milwaukee while trying to get healthy?

Perhaps most importantly, how will the postseason field shake out in the second season of a format unlike anything we've seen before?

The traffic jams in the middle of the Eastern and Western Conference playoff races show no signs of being dislodged, after all. With the new play-in round looming for seeds 7-10, the urgency to get in the top six of each conference has added another level of drama.

Some of those teams highlight the FOX Super 6 contest for Wednesday night in the NBA, which gives you a chance to win $25,000 absolutely for free! Just download the free FOX Super 6 app on your phone or tablet, pick all six games and the margin of victory correctly, and you could win the $25,000.

Here are the games for Wednesday and a bit of insight to help you make your picks.

The Lakers got Anthony Davis back over the weekend and could see LeBron back in uniform in the not-too-distant future. That’s the good news.

The bad news for Los Angeles? Even after a win over Orlando on Monday, the Lakers are fifth in the West and treading dangerously close to the play-in tournament, with a 3.5-game lead over the Trail Blazers, who currently sit in seventh.

Meanwhile, the Wizards got 45 from Bradley Beal in a 146-143 loss to San Antonio their most recent time out. Washington sits in the 10th spot in the East, and with Beal and Russell Westbrook potentially looming, they are a "want to avoid if possible" team for the postseason.

Ben Simmons returned Monday as Philly dominated the Thunder to snap a four-game losing streak. Now, the Sixers begin a back-to-back against an Atlanta squad that has remained in the upper half of the Eastern Conference race, even with Trae Young’s injury that could keep him sidelined for a while (that’s overlooking an ugly, 100-86 loss to the Magic on Monday).

After these two games against Atlanta in Philly, the 76ers can make a push toward the top seed in the East. Only four of their remaining 11 games are against teams with above .500 records coming into Tuesday: the two against the Hawks, one against San Antonio and one at Miami.

Both teams are in the second game of back-to-backs after playing Tuesday – the Celtics against the Thunder at home and the Hornets hosting Milwaukee. These two teams also met Sunday, when the Hornets got 24 points from Devonte Graham in a 125-104 rout in the Queen City.

Boston is holding on to the 6-seed in what is a competitive battle with Miami and Charlotte to stay out of the play-in round. The Celtics have been a much better team inside TD Garden: 19-11 at home coming into Tuesday and 13-18 on the road.

Heading into Tuesday, this would have been a 7-8 game in the play-in round in the West, with Memphis holding a tiebreaker edge over San Antonio and a half-game ahead of Golden State (the 10 teams in the West appear pretty set, with 11th-place New Orleans now four games in back of the 10th-place Warriors).

The fun part of this game is Damian Lillard against Ja Morant, a point guard battle in which both guys shoot the lights out and average more than seven assists per game.

We dare you to figure the Pelicans out. They can lose at home to San Antonio on a Saturday and follow that with a 17-point win over the Clippers on a Monday.

As mentioned above, New Orleans is running out of track to make a move into the tournament, while Denver has won six of seven since Jamal Murray’s season ended on April 12 against the Warriors. Michael Porter Jr. has been huge, averaging 24.8 points in his past 10 games and shooting 42.2% from beyond the 3-point line.

The Suns hold a game lead on the Clippers (and have two games in hand) for the No. 2 seed and home-court advantage in a likely second-round matchup. Also, the 2-seed would likely avoid the Lakers in the first round – a big wild-card element for this game.

Chris Paul’s run at a possible MVP award continued in Phoenix’s recent 3-2 Eastern swing, with wins over Milwaukee, Philadelphia and New York, but it was Devin Booker’s 33 that lifted Phoenix to a 118-110 win over the red-hot Knicks on Monday.

Enter the NBA Challenge contest on the FOX Super 6 app for free, and you can win this week's $25,000 jackpot! Download now at foxsuper6.com!