The eyewall of Hurricane Ian began to move on shore around 11:30 a.m. ET Wednesday, as a Category 4 storm with maximum sustained winds of 155 mph.

Hurricane Ian may go down as one of the strongest hurricanes ever to strike the U.S. as the storm nears Category 5 strength just off the Florida coast Wednesday.

With top sustained winds of 155 mph, the storm is a strong Category 4 on the Saffir-Simpson scale, but only four hurricanes have ever struck the U.S. with stronger winds.

Long before hurricanes were named, this monster storm known as the Labor Day Hurricane remains the strongest storm ever to hit the U.S.

A National Oceanic and Atmospheric Administration reanalysis of the hurricane found that maximum sustained winds of 185 mph impacted the Florida Keys on Sept. 2, 1935. 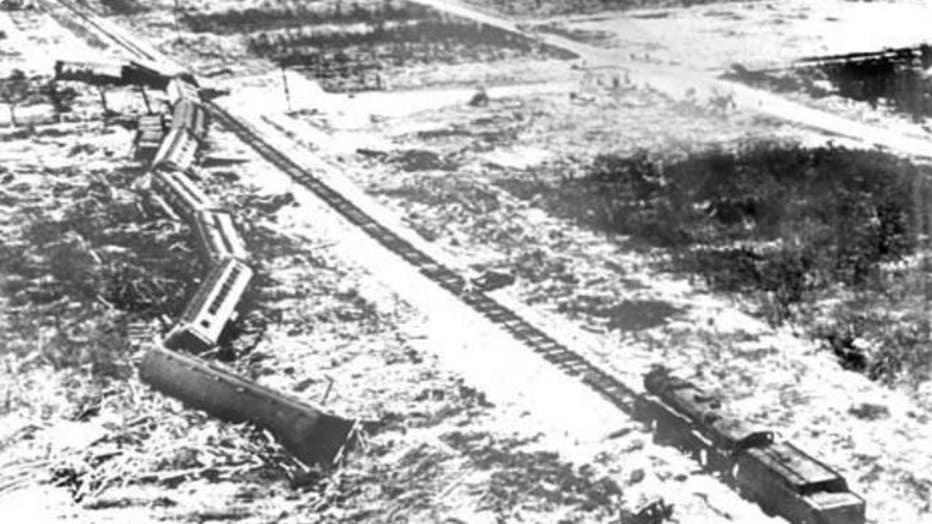 The Florida Keys railroad was destroyed by the 1935 Labor Day Hurricane. (NOAA)

The Category 5 was blamed for killing more than 600 people and completely destroying buildings, roads and other infrastructure.

Meteorologists said the compact storm’s size helped it to rapidly strengthen in the Straits of Florida after impacting the Bahamas.

Without satellites and widespread observations, tracking the hurricane was difficult.

A hurricane warning was issued by the U.S. Weather Bureau hours before landfall, but unfortunately, the message was too late for some to take precautions.

Hurricane Camille is the second-strongest hurricane ever to impact the U.S.

The Category 5 storm had sustained winds of about 175 mph when it made landfall on the Mississippi Coast on Aug. 27, 1969. 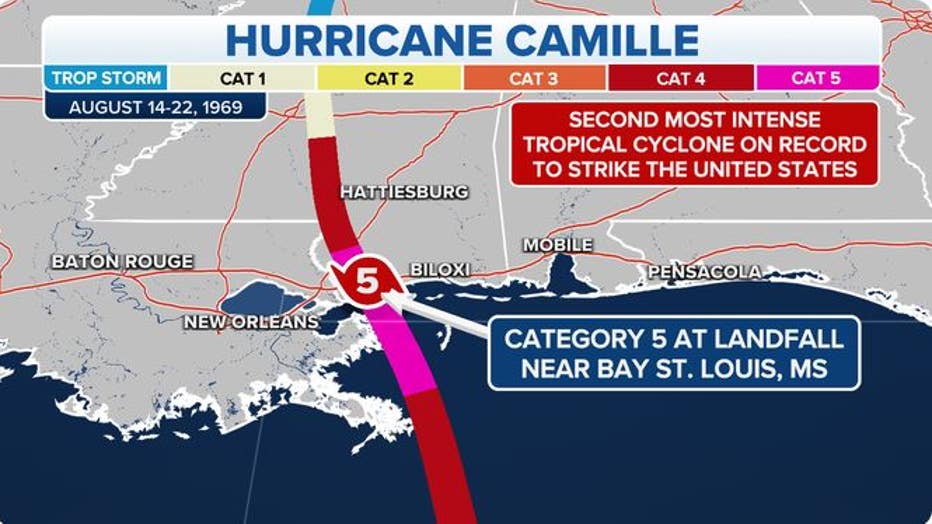 A LOOK BACK ON HURRICANE CAMILLE

Similar to other catastrophic hurricanes, its overall size was small, and hurricane-force winds only extended outward 40 miles from the center.

Camille’s howling winds destroyed recording instruments in the path, so the peak winds could not be recorded at the time. However, according to the National Weather Service office in Mobile, Alabama, a reanalysis of data from the storm found that maximum winds of about 175 mph were likely.

Hurricane Andrew, one of the most infamous Category 5 hurricanes ever to strike the U.S., happened Aug. 24, 1992.

The storm was blamed for more than five dozen deaths and caused $27 billion (equivalent to more than $57 billion in 2022). 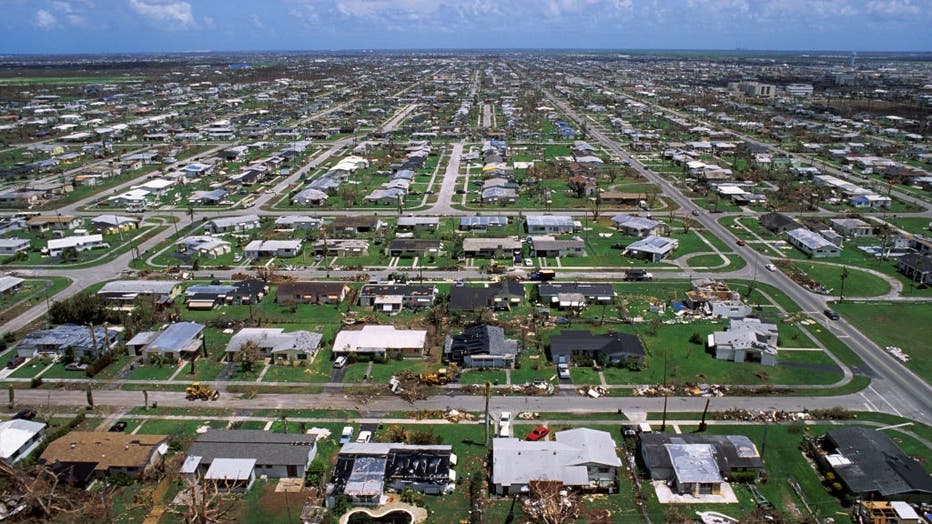 People in destroyed neighborhoods ventured out of their homes into a world they didn’t recognize, and were forced into a situation more terrifying than the storm. For the rest of that week, the nights were the worst. There was no power, no water, looters roamed the neighborhoods and gunfire echoed through the desolation. It was hell on Earth in South Dade after the storm.

A LOOK BACK ON HURRICANE ANDREW

Roads were blocked, so getting in and out of the destruction zone was hard or impossible. People got lost walking around the block because all the trees and road signs were knocked over or blown away.

Originally, Andrew was thought to be a Category 4 at landfall but after years of reanalysis, the hurricane was upgraded to a Category 5 almost a decade after landfall.

During the height of the storm, before the transmission stopped, a sensor at Tyndall AFB measured a gust to 139 mph. Nearly 100% of customers across a large portion of the Florida Panhandle lost power, with some of these outages lasting weeks. 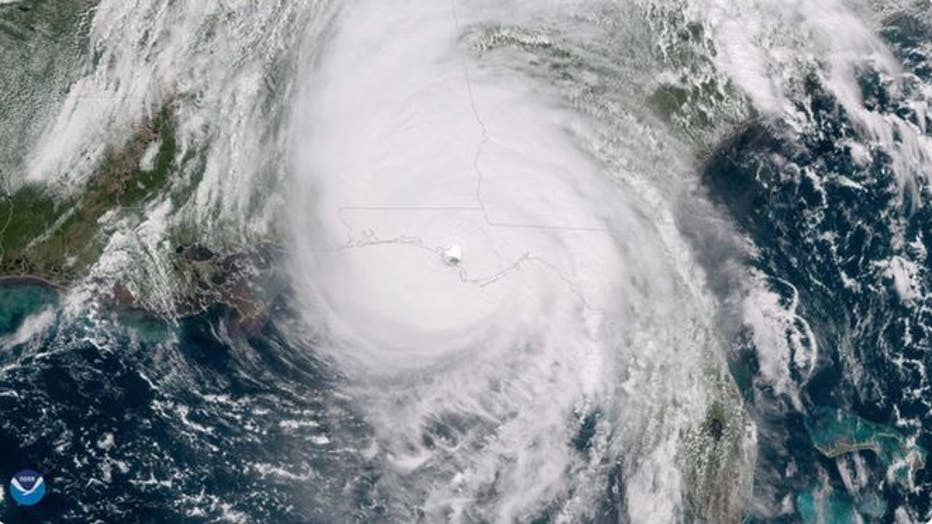 The combination of rain, surge and winds caused an estimated $25.5 billion in damage (equivalent to more than $30.0 billion in 2022).

The storm caused catastrophic damage from wind and storm surge, particularly in the area stretching from Panama City Beach to Mexico Beach to Cape San Blas, according to the National Weather Service. The widespread damage spread well inland as Hurricane Michael remained at hurricane strength into southwest Georgia.

At St. Joseph Peninsula State Park on Cape San Blas, the storm surge cut through the peninsula, creating two inlets, resulting in portions of the park no longer being accessible by vehicle, according to the NWS. "These new inlets truly demonstrate the power of storm surge," NWS wrote.

Hurricane Michael brought catastrophic storm surge to the Florida Panhandle and Big Bend areas. One of the hardest hit locations was from Mexico Beach to Indian Pass where 9 to 14 feet of peak storm surge inundation was observed. In addition, wave action caused even higher total water values and this resulted in waves destroying the second story of multiple buildings in Mexico Beach.

Get updates to this story on FOXWeather.com.