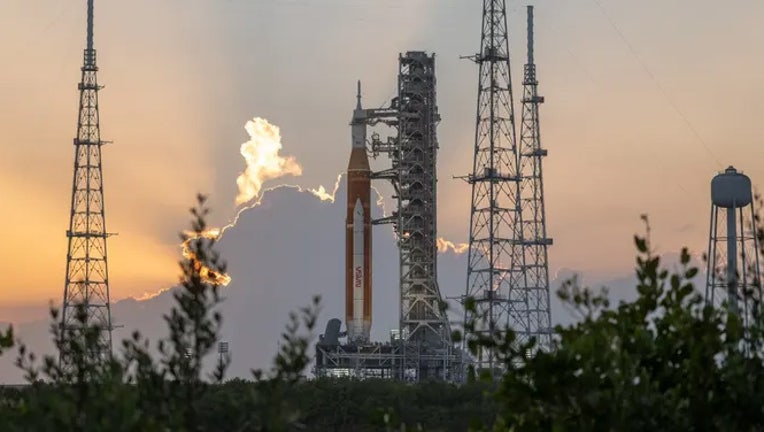 The Space Launch System rocket and Orion spacecraft sits on Launch Pad 39B at Kennedy Space Center ahead of a second launch attempt on Sept. 3, 2022. (Image: NASA)

CAPE CANAVERAL, Fla. - After completing a fueling test of its mega moon rocket earlier this week, NASA engineers now have to contend with Tropical Depression Nine that appears to be aimed at Florida during the next launch attempt.

NASA managers said despite the tropics, they are waiting for forecast models to improve enough to make a call on whether to roll back the 322-foot-tall Space Launch System rocket and Orion spacecraft.

For now, Plan A is to forge ahead with a launch attempt on Tuesday during a 70-minute window opening at 11:37 a.m. ET.

The moon rocket is vertical at Kennedy Space Center launchpad 39B on Florida's east coast, awaiting a third launch attempt.

After two previous scrubs due to unruly hydrogen leaks and an engine cooling issue, NASA fueled the SLS with more than 700,000 gallons of cryogenic propellant during a test Monday to determine if engineers had resolved the problems.

NASA is hoping to launch on Sept. 27 at 11:37 a.m. EDT. However, that launch window was not entirely up to the space agency. NASA first needed approval from the Space Force, which oversees the Eastern Range, to extend the Flight Termination System certification due to safety requirements. The FTS is required on all rockets and would cause the vehicle to self-destruct if it veers off course and threatens the public.

SLS chief engineer John Blevins shared the good news on Friday that both the Sept. 27 and Oct. 2 backup date were approved by the Space Force.

Now NASA will just have to make sure a tropical system doesn't ruin its launch.

In the past week, the tropics have become full of activity after a slow start to the Atlantic hurricane season.

WHAT IS THE ‘CONE OF UNCERTAINTY' IN HURRICANE FORECASTS? 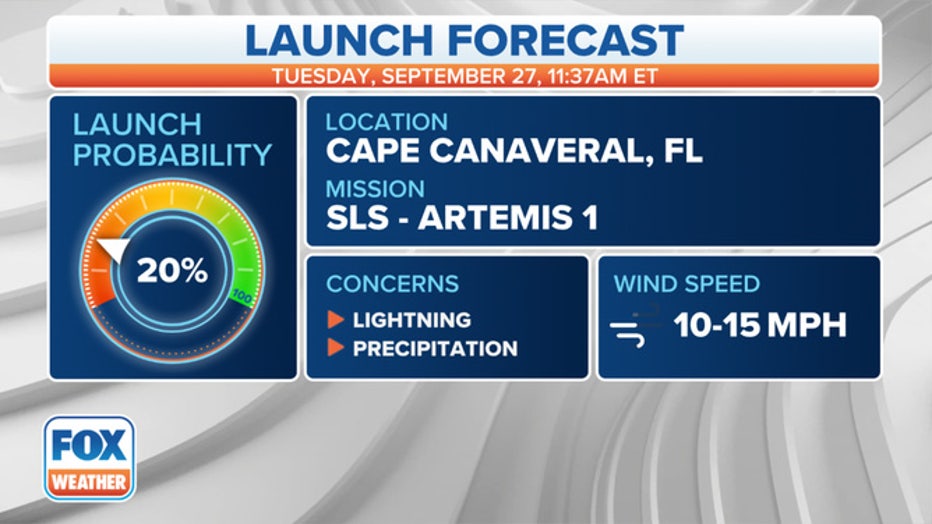 On Friday, the 45th Weather Squadron released its first launch forecast for Sept. 27. Forecasters are predicting only a 20% chance of favorable weather for the 70-minute launch window.

According to the forecast, a front pushing into the Space Coast this weekend will bring rain and northeasterly winds and then Tropical Depression Nine, which could be a tropical storm soon, will gradually push more shower activity to the Space Coast.

"The weather begins to further deteriorate Monday into Tuesday, as a possible hurricane (TD 9) shifts into the northwest Caribbean Sea," Launch officers wrote. "The official forecast from the National Hurricane Center tracks the possible hurricane over western Cuba early Tuesday, with the storm entering the eastern gulf near the Florida Keys mid-day Tuesday. Deep tropical moisture will spill across the Spaceport Tuesday, with widespread cloud cover and scattered showers likely during the launch window."

This particular system will be a factor in any upcoming Artemis launch attempt because Tropical Depression Nine is forecast to become a tropical storm later Friday and strengthen into a hurricane and possibly make landfall on the Florida Peninsula early next week.

Blevins said if a hurricane is forecast to come near KSC, he would recommend the SLS be rolled back into the hangar. However, NASA managers are waiting until at least Saturday morning before that decision would be made.

If a tropical system does bring strong winds to Florida's Space Coast, NASA would need to roll the 322-foot-tall rocket back into the Vehicle Assembly Building. That 2-mph move to the hangar cannot happen in winds over 46 mph but stationary at the pad the rocket can withstand 74 Knots.

LINK: GET UPDATES ON THIS STORY AND TD9 FROM FOXWEATHER.COM