Tropical Depression 9 is now officially Tropical Storm Ian and the system is forecast to strengthen into a major Category 3 hurricane with possible landfall in Florida next week, the National Hurricane Center said Friday.

Main weather concerns: Main concerns remain life-threatening rip currents at ALL Central Florida Atlantic beaches. Breaking waves in the 4-6' range with a few larger waves at times. A "longshore" will also be at play at all time today through the weekend.  A longshore current is a fast-moving channel of water that races from North to South. This current will be encountered immediately upon entering the surf zone.

BEACHES: The beaches look decent today but, showers will be possible-blowing by in a Northeast breeze. Rain chances are near 20%. Good idea to stay out of the water as deadly rip currents and high surf are still issues. Highs hit near 87 on the sand today. Breezes from the Northeast at 10-20mph.

THEME PARKS: Plenty of sunshine and slight rain chances at the parks today! Highs will hit near 90 and rain chances are at 20-30% for the pm... Sunscreen and hydration will both be a must today. Enjoy it!

EXTENDED OUTLOOK:
The FOX 35 STORM TEAM is watching newly formed Tropical Storm Ian in the Southern Caribbean. This feature could bring impacts as a strong hurricane to Florida by next Tuesday-Wednesday.

Tropical Storm Ian formed Friday morning in the Caribbean Sea, and much of the Florida Peninsula is already included in the cone of uncertainty for the system that's likely to become a major hurricane in the days ahead. 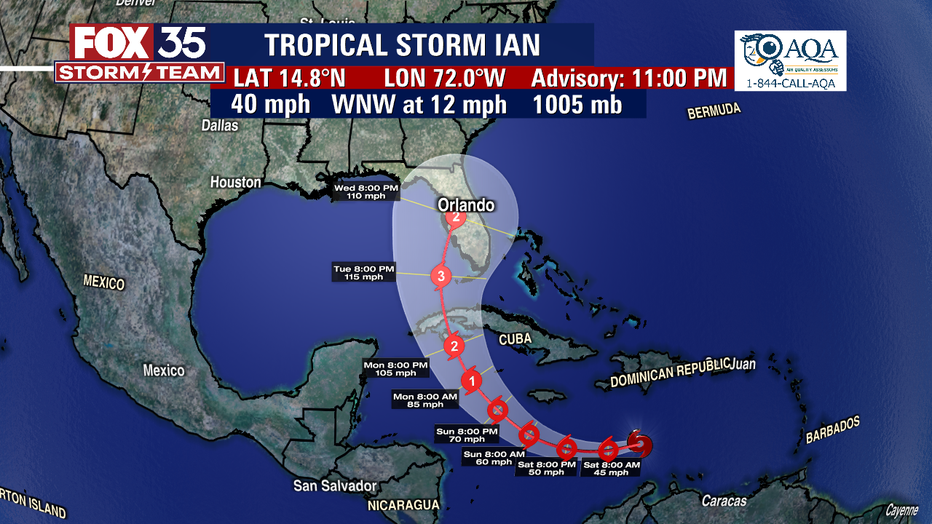 A hurricane is expected to form late weekend just before entering the Southern Gulf. From there, future Ian draws closer to the Southwest Florida Peninsula early next week. Hard to iron out local impacts right now so stay with the FOX 35 Storm Team for the latest this weekend and beyond!