But this is just one of many firsts for the country and for Harris, the daughter of Jamaican and Indian immigrants. Her ascension to the vice presidency was marked by history-making moments.

The vice president highlighted the trailblazing women who paved the way for her history-making moment, as well as public figures who changed the nation, including Abraham Lincoln, Dr. Martin Luther King, Jr. and the women who worked tirelessly for equal rights.

Harris hailed the efforts of those who strived to make America better.

"In many ways this moment embodies our character as a nation. It demonstrates who we are, even in dark times, we not only dream, we do, we not only see what has been, we see what can be. We shoot for the moon and then we plant our flag on it we are bold, fearless and ambitious. We are undaunted in our belief that we shall overcome that we will rise up: this is American aspiration," Harris said.

"A great experiment takes great determination. The will to do the work and then the wisdom to keep refining, keep tinkering, keep perfecting. The same determination is being realized in America today. I see it in the scientists who are transforming the future, I see it in the parents who are nurturing generations to come and the innovators and the educators. In everyone everywhere who is building a better life for themselves, their families and their community. This too, is American aspiration," Harris continued. 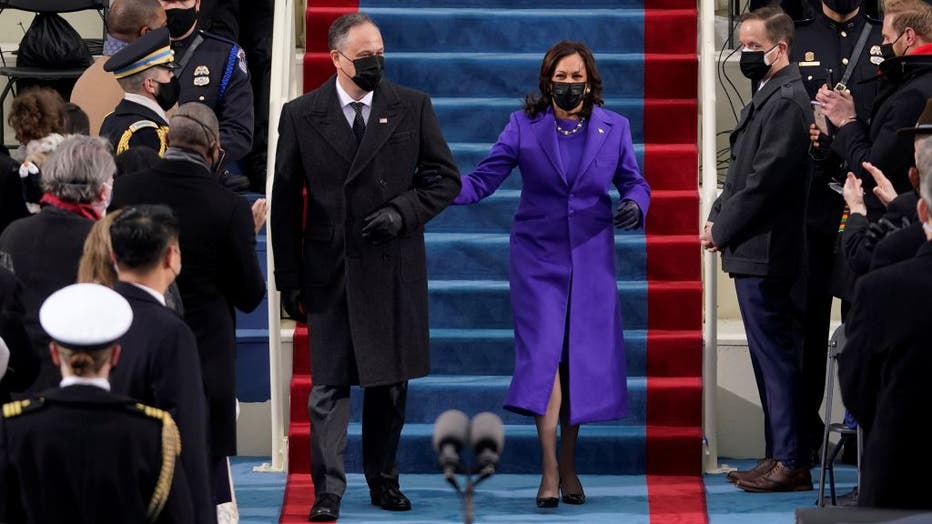 US Vice President-elect Kamala Harris and her husband, incoming Second Gentleman Doug Emhoff, arrive for the inauguration of Joe Biden as the 46th US President on January 20, 2021, at the US Capitol in Washington, DC. (Photo by PATRICK SEMANSKY/AFP v

During the inauguration earlier on Wednesday, Sen. Amy Klobuchar opened the swearing-in ceremony of Biden and Harris.

U.S. Sen. Amy Klobuchar of Minnesota spoke at the inauguration ceremony, pledging to never take democracy for granted after the US Capitol siege and celebrated Kamala Harris' historic VP role.

"We celebrate our first African American, first Asian American, and first woman Vice President, Kamala Harris, who stands on the shoulders of so many on this platform who have forged the way to this day. When she takes the oath of office little girls and boys across the world will know that anything and everything is possible," Klobuchar said.

"And in the end, that is America. Our democracy, a country of so much good. And today on these Capitol steps and before this glorious field of flags we rededicate ourselves to its cause," Klobuchar continued.

On Twitter, Harris posted a video of her swearing-in, writing, "It's an honor to be your Vice President."

Reaction pours in for Harris

Reaction from lawmakers and celebrities poured in after the inauguration in response to the historic moment for Harris.

"In tears watching this extraordinary moment for women in the U.S. and the world. Vice President @KamalaHarris," media mogul Oprah wrote.

"It is also a historic day in America with the swearing in of @VP @KamalaHarris, the daughter of immigrants. You’re an inspiration, Madam Vice President," Tucson mayor Regina Romero wrote.

Sen. Elizabeth Warren wrote, "When @JoeBiden and @KamalaHarris are sworn in today, decency and competence will be back in the White House. Millions of girls will be able to dream bigger. And we’ll be ready to make big, structural change. "

"The people have spoken. We needed an administration that values truth, unity, and diversity. We are seeing it right now. History was made today as the first Black, first south Asian and first female Vice President in the history of our country, Kamala Harris took her oath," professional basketball player Earvin Magic Johnson wrote on Twitter.

Harris worked as a deputy district attorney in Alameda County, California in the 1990s at a time when violent crime in Oakland was rising, according to The New York Times. She worked for the San Francisco city attorney before she was elected – twice – as the city’s district attorney.

But as her national profile grew, so too did her aspirations for higher positions in government.

"Vice President Harris has already been the ‘first’ many times in her career," former first lady Michelle Obama told Vogue Magazine. "This is a woman who knows what she’s doing."

In 2010, voters elected her as the first Black woman to serve as California attorney general.

Then, in 2016, Harris made history as the first Black and Indian American woman to represent California in the U.S. Senate, and the second Black woman in U.S. history to secure a seat.

During her time in the Senate, she quickly gained attention for her assertive questioning of Trump administration officials during congressional hearings.

In one memorable moment in 2019, Harris tripped up Attorney General William Barr when she repeatedly pressed him on whether Trump or other White House officials pressured him to investigate certain people.

Harris launched her presidential campaign in early 2019 with the slogan "Kamala Harris For the People," a reference to her courtroom work. She was one of the highest-profile contenders in a crowded Democratic primary and attracted 20,000 people to her first campaign rally in Oakland.

But the early promise of her campaign eventually faded. Her law enforcement background prompted skepticism from some progressives, and she struggled to land on a consistent message that resonated with voters.

After the ballots were counted, Harris became the country’s first Black and first female second-in-command.

While Harris withdrew from the presidential race in Dec. 2019, prior to the primary election, she soon became a top contender for the No. 2 spot after her own White House campaign ended.

In August of 2020, Biden announced Harris as his running mate in the 2020 presidential election, landing her on one of the most consequential presidential tickets in U.S. history as the nation’s first Black woman to compete as a vice presidential candidate for a major party.

"I have the great honor to announce that I’ve picked @KamalaHarris — a fearless fighter for the little guy, and one of the country’s finest public servants — as my running mate," Biden wrote on Twitter.

"Back when Kamala was Attorney General, she worked closely with Beau. I watched as they took on the big banks, lifted up working people, and protected women and kids from abuse. I was proud then, and I'm proud now to have her as my partner in this campaign," Biden said.

The path to high-ranking political positions presented its own challenges for Harris.

Biden and Harris had to wait nearly one week for news outlets and election officials to confirm and declare them the winner of the 2020 presidential election, due to a historic number of mail-in votes being tabulated. Meanwhile, President Donald Trump refused to concede, citing unfounded claims of widespread voter fraud and inciting his supporters to riot at the U.S. Capitol just one week before Biden and Harris’ inauguration.

But it wasn’t Harris’ first brush with political uncertainty. When she ran for attorney general of California, she faced similar challenges in the election — a race so close that results were not declared for more than three weeks.

When Biden first announced Harris as his running mate in August 2020, supporters flooded social media with praise for the historic moment. Critics also voiced their opposition, noting decisions she made as a prosecutor.

But it was undeniable that her nomination and win marked a major turning point in U.S. history and politics.

"Americans, including little Black and Brown girls, watched with amazement, pride and a renewed sense of hope. We congratulate Senator Harris and wish her the best on this historic journey, " said Dr. Glenda Glover, International President of the Alpha Kappa Alpha Sorority Incorporated in August when Biden announced Harris as his pick.

"It is a proud moment for any citizen of this country who believes in the possibilities that America represents regardless of race, color or creed, sex, nationality or political party," Glover said. Harris is a member of the historically Black female sorority, which also counts Maya Angelou and Coretta Scott King as members.

"This moment is long overdue. For far too long, we have undervalued Black women’s political power and their role in shaping our culture, communities, and country," said the NAACP in an August statement.

Black women have continuously struggled for equal rights in leadership positions. Women didn’t have the right to vote in the U.S. until 1920, and even then, Black people couldn’t vote in most of the South.

In the 1960s, Black women helped organize the civil rights movement but were kept out of leadership positions.

The women who came before Kamala Harris

Harris’ win was a nod to other trailblazing women who also fought to make their way in the world of politics.

In 1959, Hawaii Rep. Patsy Mink became the first woman of color and the first Asian American woman elected to Congress.

Shirley Chisolm was the first Black woman elected to Congress in 1969, and the first Black American and first woman from a major political party to seek the presidential nomination. In 1972, Chisholm ran for president, a moment long considered as a groundbreaking moment for Black women in politics. The nomination went to Sen. George McGovern.

While Harris became the nation’s third female running-mate in history, she is not the first woman to run for vice president. Walter Mondale selected Geraldine Ferraro in the 1984 presidential election — the first woman chosen as a vice president on a major party ticket. The second woman picked as a vice-presidential candidate was in 2008 when Republican John McCain selected Alaska Gov. Sarah Palin.

In 1993, Carol Moseley Braun became the fist Black woman to serve in the Senate — Harris was the second. In 2004, Braun campaigned for president before dropping out of the race.

In 1968, 38-year-old Charlene Mitchell of Ohio became the first Black woman to run for president from the Communist Party. Black female communists at the time said they fought against racism, poverty, injustice and unfair labor practices.

Mitchell’s presidential campaign, which focused on civil rights and poverty, was probably doomed from the start. In 1968, many states didn’t allow communists on the ballot. Media outlets from the Boston Globe to the Chicago Tribune also discussed Mitchell’s "unsuitability" as a candidate because she was both Black and female. Mitchell received just 1,075 votes.

Other independent Black female presidential candidates included community organizer Margaret Wright, who ran on the People’s Party ticket in 1976; Isabell Masters, a teacher who created her own third party called Looking Back and ran in 1984, 1992 and 2004; and teacher Monica Moorehead of the Workers World Party ticket, who ran in 1996, 2000 and 2016, according to the Associated Press.

"Without fanfare or recognition, they [Black women] organized, testified, rallied, marched, and fought—not just for their vote, but for a seat at the table. These women and the generations that followed worked to make democracy and opportunity real in the lives of all of us who followed," Harris said in her nomination acceptance speech at the virtual Democratic National Convention in August.