1st Black woman to work in a NASCAR pit crew

Brehanna Daniels is the first Black woman to work in a NASCAR pit crew.

DAYTONA BEACH, Fla. - One woman is changing the face of NASCAR by helping to make it more inclusive.

Brehanna Daniels is the first black woman in a NASCAR pit crew. At just 27-years-old, she is doing something that has never been done before by an African-American woman.

"So I got me a nice, number one, Chick-Fil-A sandwich," said about the day her life changed forever. "Then I get a strong tap on my shoulder and it was a lady by the name Tiffany Sikes. She's like 'Brehanna, you know the NASCAR pit crew is coming to our school on Wednesday and I think you should try out.'"

She responded, "the NASCAR pit crew? Girl, I don't even watch NASCAR. What you telling me this for."

Nonetheless, she tried out and was the only girl that day.

"I did a good job and Coach Phil Horton was like 'you'll definitely be hearing back from us.'"

Her athletic skills, drive, and determination made her stand out from the crowd. And make no mistake – you have to be an athlete to do this job. 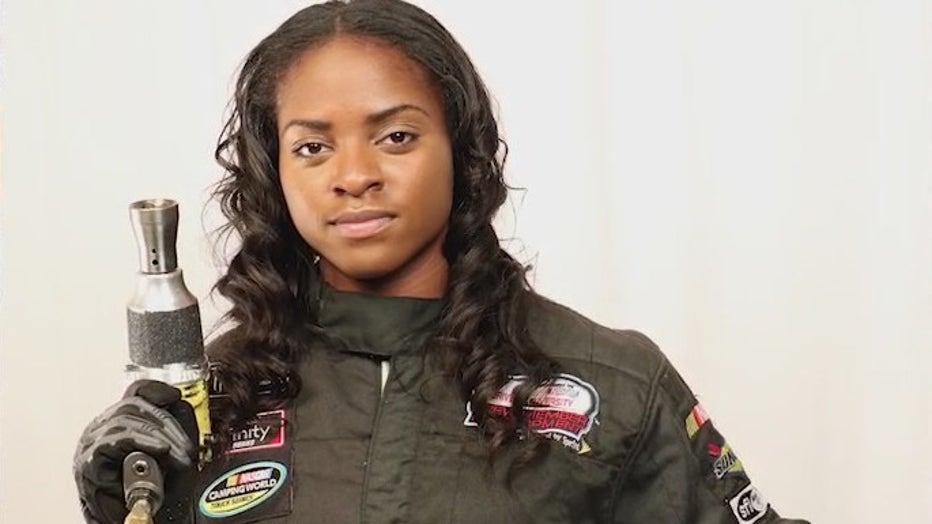 "I know my job since I have two tires to change every pit stop. I have to take that tire off in around a second or two -- less than two seconds, I'm taking five ligaments off. But the whole stop is done between 11 and 14 seconds," Brehanna explained. "There's a lot of stuff going on pit road that we have to be cautious of. Like, getting ran over, there's a possible chance that could happen. Or a car hitting me in the back if I'm changing rear tires. So, there's a lot we have to be on the lookout for as we do our jobs."

But the danger does not slow her down or intimidate her. Her never give up attitude drives her to keep going and brush off any criticism that comes her way.