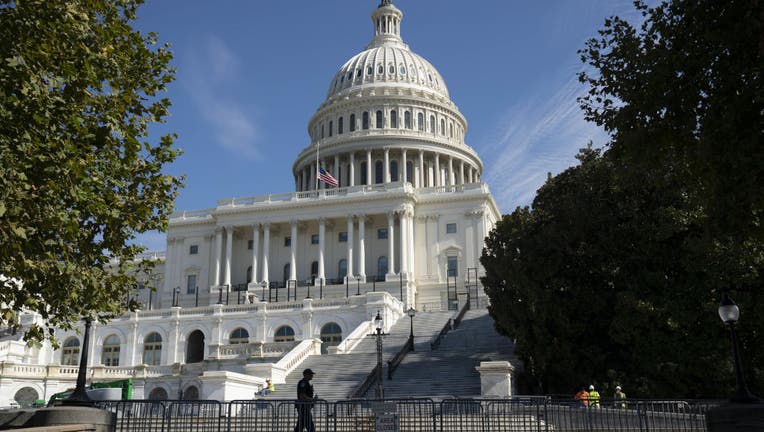 A U.S. Capitol police officer walks along the West Front of the U.S. Capitol in Washington, D.C., U.S., on Friday, Oct. 22, 2021. Congressional Democrats are at odds over both the tax and spending sides of a bill to enact the bulk of the White House'

TALLAHASSEE, Fla. - The Florida Senate on Thursday overwhelmingly approved maps in the once-a-decade redistricting process, despite concerns from Democrats that a surge in Hispanic population doesn’t appear to be fully represented with the changes.

Meanwhile, a few Democrats heaped praise on the Senate’s proposed congressional map, which doesn’t include controversial lines suggested Sunday by Gov. Ron DeSantis’ general counsel. The Senate and House ultimately will have to reach agreement on congressional districts, which then would go to DeSantis for approval.

The Senate voted 31-4 to approve its congressional plan (SB 102), which could slightly add to the Republican majority in Florida’s congressional delegation. Senators also voted 34-3 in favor of new state Senate lines (SJR 100), which could put a few incumbent South Florida Democrats into the same districts.

Sen. Victor Torres, D-Kissimmee, said after the votes he expects the congressional map to be legally challenged over the failure to increase --- from four --- the number of Hispanic districts, particularly in Central Florida.

"I'm not looking at myself, my district, I'm looking at the broader picture as to how this state has grown with my community, my culture," Torres said.

In voting for the congressional map, Sen. Annette Taddeo, a Miami Democrat running for governor this year, said she was concerned about having enough votes to override a veto if DeSantis continues to push his plan, which would be more favorable to Republicans.

She alluded to widespread speculation that DeSantis is seeking to become the Republican candidate for president in 2024 and to what are known as the "Fair Districts" constitutional amendments, which voters approved in 2010 to set redistricting standards.

Senate Reapportionment Chairman Ray Rodrigues, R-Estero, said the goal of his committee was to avoid mistakes from the last redistricting effort, when the state Supreme Court tossed initial congressional and Senate maps.

"I am not saying today that this is the only map that can be drawn to be compliant," Rodrigues said during a discussion on the Senate floor. "The courts themselves recognize that a skilled map drawer can always improve on a given map on tier two metrics, if given enough time. But what I am saying is that the map before us today fulfills the charge that (Senate President Wilton Simpson) delivered to the Reapportionment Committee to deliver a map designed to be compliant with our Florida Constitution, with all federal and state statutes."

So-called tier one redistricting requirements, in part, include a prohibition on drawing lines with the intent of favoring or disfavoring a political party or an incumbent. Tier two includes standards such as districts being nearly equal in population, remaining compact and, where possible, following boundaries of such things as counties and cities.

Florida’s U.S. House delegation will increase from 27 to 28 members because of population growth over the past decade. The Senate’s congressional map would result in an increase from 16 to 17 in the number of districts won in 2020 by former Republican President Donald Trump.

The DeSantis proposal seeks to create 18 districts that went for Trump in 2020. In part, the proposal would make vast changes to historically Black districts held by Democrats Al Lawson in North Florida and Val Demings in the Orlando area.

Meanwhile, the Senate’s map for Senate districts could require Farmer and Sen. Jason Pizzo, D-North Miami Beach, to face off in a primary later this year and force Minority Leader Lauren Book, D-Plantation, to go up against the winner of a March special election in Broward County’s Senate District 33, a Democratic stronghold.

The House has moved slower than the Senate on new maps. It is drawing state House districts and a congressional plan.

Before Thursday’s Senate floor session, a group known as the Fair Districts Coalition urged Rodrigues and House Redistricting Chairman Tom Leek, R-Ormond Beach, to remove the governor’s proposal from a redistricting website and from consideration until everyone who was involved in crafting the map is disclosed.

"In this specific instance, the governor’s choice to insert his office into the legislative process, at a minimum, creates an appearance of partisan intent," the coalition said in a letter. "And his failure to disclose the identity of every person involved in drawing the map underscores that appearance of improper intent."