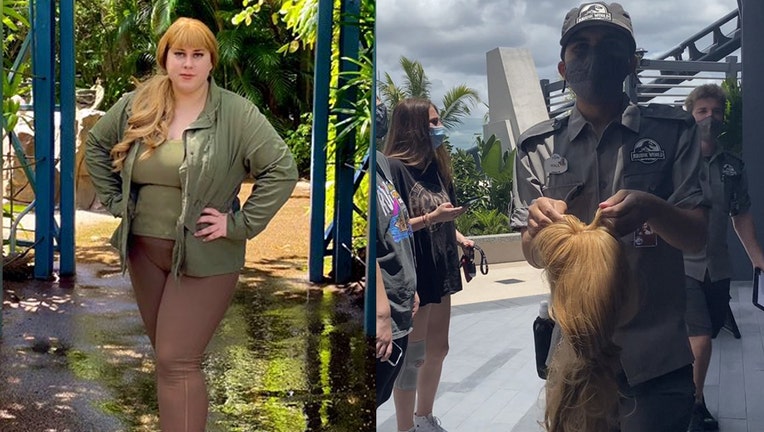 ORLANDO, Fla. - A woman who visited Universal Orlando Resort this week to ride the new ‘Jurassic World Velocicoaster’ said she lost her wig on the attraction.

The night prior, the woman actually tweeted ‘Will my wig stay on for VelociCoaster? Tune in tomorrow to find out!’

Turns out, the answer is no.

Emi was dressed as ‘Claire Dearing,’ one of the main characters in the film ‘Jurassic World,’ while visiting the parks on Monday. She even snapped a picture with a man dressed as the ‘Owen Grady’ character from the movies.

However, when it came to actually riding Universal Orlando's newest coaster, she reportedly lost her wig. She posted a video of a Velocicoaster employee returning the wig to her, as she laughed and said "thank you."

She followed it up with another tweet that showed her wig before and after riding the attraction.

People started to have a lot of fun with this online.

For example, someone even made a Twitter page for Emi's wig.

To top it off, Universal Orlando Resort even tweeted Emi a play on a classic Jurassic Park quote, stating "Hold onto your b̶u̶t̶t̶s̶ hair."

They later retweeted the before and after photos with the caption, "Please secure ALL loose articles."

RELATED: Masks no longer required in most outdoor areas at Disney, Universal

The theme park company previously described the thrill ride as "a series of intense maneuvers that will send guests catapulting up to 70 mph and more than 150 feet in the air with the swiftest of prehistoric predators."

They said to be prepared to:

Guests will reportedly join the cast of the films — Chris Pratt, as Owen Grady; Bryce Dallas Howard, as Claire Dearing; and BD Wong, as Dr. Henry Wu — on a high-speed chase alongside a nimble Velociraptor pack.